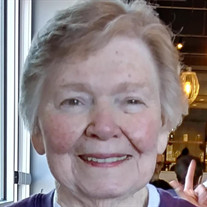 Winifred Ann Seibert Daniels Payne Johnston, 85, of Carneys Point, New Jersey passed away on July 2, 2021 in Mannington, New Jersey. Born in 1936 in Woodstown, New Jersey, Winnie attended Penns Grove Regional Schools and graduated from Re-Hi in 1953. Mom, Grammy, Winnie, or Aunt Freddie as she is known by nieces and nephews, was a woman who had survived many hardships but always worked hard for her family and always had an open heart to love everyone. She retired from the “County of Salem” after 30+ years of employment. Left to mourn her loss is her daughter Diana and husband Daniel Ford of Carneys Point, New Jersey, son Jay Daniels, III and wife Lynda, grandchildren Jay, IV and Nora of Carneys Point, New Jersey, step-son Christopher Johnston and wife Laurie, grandchildren Nicholas and Carly of Leesburg, Florida, and step-daughter Laura and husband Anthony Lamo, grandchildren AJ and Patrick of Brick, New Jersey; many nieces, nephews, cousins, extended family and friends. She was predeceased by her first husband, Jay Daniels, Jr. who died in 1967; her second husband John Payne who died in 1984; and her third husband Donald Johnston who died in 2012; her parents Winfield and Nora Seibert; brothers Joseph Seibert, Edward Seibert, Wilbert (Buddy) Seibert, and sister Alice Smith. As a youth, she loved sports and playing softball, field hockey and basketball throughout High School. As an adult, she loved to bowl and play pool. As a Senior Adult, her love was cards and jigsaw puzzles. Winnie was a 69 year member of the fraternal organization the “Degree of Pocahontas” as well as a 50+ year member of the “Order of the Eastern” Star. Winnie was also an active member of the “Carneys Point Fire Department Auxiliary”. Viewing will be held on Wednesday, July 7, 2021 from 9:30 AM till 11:00 AM at Ashcraft Funeral Home, 740 South Broadway, Pennsville, New Jersey with a Memorial Service at 11:00 AM. Internment will be at Lawnside Cemetery in Pilesgrove, New Jersey. Memorial contributions may be made in Winnie’s memory to the “Salem County Meals-On-Wheels” organization – she loved delivering meals to those in need after her retirement; or the “Carneys Point Fire Department Auxiliary”.

The family of Winifred S. Johnston created this Life Tributes page to make it easy to share your memories.

Send flowers to the Johnston family.