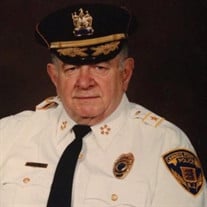 William “Bill” Thomas Luzzo Sr., of Carneys Point, passed away on Monday, April 19, 2021 at home. Bill was born to Bastino & Norma Luzzo on May 24, 1938. Bill graduated from Penns Grove High School in 1957. He worked for the Chrysler Corporation and his father's (Busty’s) service station on Virginia Avenue and served in the national guard, before beginning his career in law enforcement. Known affectionately as “Chief,” Bill was known by many for 39 years of service to his community through law enforcement. He began as a patrolman with the Upper Penns Neck Police Department in 1959, served as the last Chief of Police for Upper Penns Neck Police Department until 1976, and served as the first Chief of Police for Carneys Point Township until 1998. Bill was immensely proud to serve as the Chief of Police, stating that it was a pleasure to work for the people of Carneys Point and that he believed the police department to be one of the best. Bill continued serving throughout retirement, as a member of the following organizations: South Jersey Bowling Association (President & Hall of Fame Member), New Jersey State Bowling Association (President & Hall of Fame Member), International Association of the Chiefs of Police, Salem County Police Chiefs Association, New Jersey State Association of Chiefs of Police, the Fraternal Order of Police, the Sakima Country Club, Penns Grove Rotary, Penns Grove Masonic Lodge, and the Penns Grove-Carneys Point Regional Board of Education. Bill had many accomplishments and accolades, but was most proud to be married to his wife of 58 years, Kathryn “Cookie” Luzzo. Bill and Cookie loved spending time with one another, whether it was celebrating a holiday with family, going on a long drive to a special restaurant, or traveling across the country for bowling tournaments and police chiefs’ conventions. Bill is predeceased by his beloved wife, his parents, his daughter, Karen Sue Luzzo, and his brothers Skip and Tony. He is survived by his son William Luzzo Jr. and daughter-in-law Jane Luzzo; grandchildren Linnea Luzzo and Nicole Luzzo; his sisters Rosemary Luzzo-Ammon and Karen Venello (Michael); his sisters-in-law Sally Luzzo, Carol Berry (Charles), and Susan Bittle (Bruce); and his 21 nieces and nephews. There will be a visitation from 10AM to 12PM on Friday April 23rd at the Penns Grove Masonic Lodge Excelsior, 330 Georgetown Road, Carneys Point. Burial will follow at Eglington Cemetery, 320 Kings Hwy, Clarksboro. Due to the pandemic, please wear a mask and practice social distancing during the visitation and interment. In lieu of flowers, please donate to a charity of your choice. Arrangements are made by Ashcraft Funeral Home.

The family of William T. Luzzo Sr. created this Life Tributes page to make it easy to share your memories.

Send flowers to the Luzzo family.