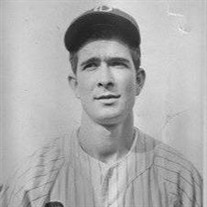 William H. “Bucky” Dougan, a lifelong resident of Penns Grove, NJ went home to be with the Lord on his 84th Birthday, Tuesday January 6th, 2015 at the Memorial Hospital in Salem County. Bucky graduated in 1948 from Penns Grove Regional High School. During his years there he won four letters in sports which he played; football, basketball, baseball, pole vaulting, and track. He also won a Gold Championship Medal for Pole Vaulting. Bucky enlisted in the Navy a year later and served our country during the Korean War. He also continued his ball playing in the Navy and was rated #1 as one of the year's outstanding ball players. In 1954, he signed with the Phillies. After leaving the Phillies, he met his loving beautiful wife and they started their family. He still wasn't ready to hang up his baseball spikes and went on to coaching Little League for Penns Grove -Carneys Point. He led one of his teams to win a District 15 Little League win. Bucky was a Lab Technician for DuPont’s for 10 years then went into the Heating and Air Industry. He was employed with Laury Heating and Ross Fogg. Bucky was a very selfless, kind, caring, loving, and giving man. He would give a stranger the last penny in his pocket. He was a true romantic with his loving wife whom he truly loved spending his time with. He also loved spending time with his grandkids and tossing the baseball with them. He instilled his passion for the game in all of them. He also enjoyed fishing, golfing, and taking long walks every day. His love of sports was amazing, he would have three TVs on at one time in his den and have three different games on at the same time. Bucky was inducted into the Salem County Sports Hall of Fame on December 30, 2013, a well-deserved honor. Bucky is survived by the love of his life and loving wife of 51 years Teresa Pagnotto Dougan, his children, Nicholas Dougan Sr. & wife Margie of Pennsville and daughter Kimberly Dougan Stone & significant other John Hulings of GA. He was the very proud Pop Pop to three wonderful grandkids. Nicholas Dougan Jr. (formerly of Carneys Point) who is serving our country in the United States Air Force, Chelsea Dawn Stone of GA, and Matthew Dougan of Carneys Point. He is also survived by his sister Joanne Gagliardi of Delaware and brothers, John of Texas and Joseph of Carney's Point. He was predeceased by his parents Joseph and Anna (Supernavage) Dougan, sister Dorothy Doughty, and brother Stanley Dougan. Relatives & friends are invited to his visitation on Saturday January 10 from 9:30 to 10:30 am at Ashcraft Funeral Home, 47 State Street, Penns Grove, NJ. A Mass of Christian Burial will be celebrated at 11:00 am at St. Gabriel the Archangel Parish – Corpus Christi RC Church, 369 Georgetown Rd. Carneys Point, NJ. Interment will be private at a later date. In Lieu of flowers, donations would be appreciated to The Alzheimer's Association or to St. Gabriel the Archangel Parish. www.ashcraftfuneralhomes.com

William H. &#8220;Bucky&#8221; Dougan, a lifelong resident of Penns Grove, NJ went home to be with the Lord on his 84th Birthday, Tuesday January 6th, 2015 at the Memorial Hospital in Salem County. Bucky graduated in 1948 from... View Obituary & Service Information

The family of William H. Dougan (Bucky) created this Life Tributes page to make it easy to share your memories.

Send flowers to the Dougan family.