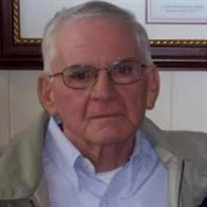 William/Bill (Butch) Lee Buckingham, 87, of Deepwater, son of the late William Earl and Elsie Mae Buckingham, died peacefully at home on May 21st, 2022 with his family by his side. He was born in Deepwater NJ on March 20, 1935 and was a longtime resident. He graduated from Penns Grove High School in 1952. In his early years, he was a firefighter for the Deepwater Fire Department. In 1958, he was drafted into the U.S. Army where he served on Active Duty for 2 years as a light weapons infantryman. He was then transferred to the standby Reserve to serve for 2 years as a Clerk Typist. He spent a year in Korea in 1959 and was honorably discharged with a Good Conduct Medal in 1962 at the rank of SP4. The Buckingham family had a long history of military service of which he was very proud. He worked as an electrician for DuPont Chambers Works for 40 years, eventually retiring in 1992. Butch enjoyed watching his grandchildren play sports and was a big Philadelphia Phillies fan. He also enjoyed “treasure hunting” at the beach with his metal detector. For years he served as a volunteer for Meals on Wheels. He is survived by his wife, Joan Buckingham, two brothers, Paul Buckingham (wife Myrna), Thomas “Gene” Buckingham, sister, Jeanette Harbeson, and sister-in-law Doris Buckingham. Additionally, he is survived by his children: Brenda Hanby (husband Bill), David Buckingham (wife Pinky), and Donna Sax van der Weyden (husband Dan); his grandchildren, David Buckingham Jr., Adam Buckingham (wife Marta), Scott Ward, Bethany Ward, Danielle Wilson (husband Will), Megan Sax van der Weyden, and Don Paolo, Patrick, and Bryan Tiamson; and his great grandchildren, Neko Caldwell and Theodore Buckingham. In addition to his parents, he is predeceased by 5 brothers; Jack, Harry, Richard, Charles “Robert”, and Milliard (KIA in WWII) and 1 sister; Elsie Coffman. A funeral service will be held at 11am with a visitation from 9:30-11 AM at Ashcraft Funeral Home, 740 South Broadway Pennsville, NJ on Thursday, May 26, 2022. Burial will follow at Eglington Cemetery.

William/Bill (Butch) Lee Buckingham, 87, of Deepwater, son of the late William Earl and Elsie Mae Buckingham, died peacefully at home on May 21st, 2022 with his family by his side. He was born in Deepwater NJ on March 20, 1935 and was a longtime... View Obituary & Service Information

The family of William L. Buckingham created this Life Tributes page to make it easy to share your memories.

Send flowers to the Buckingham family.