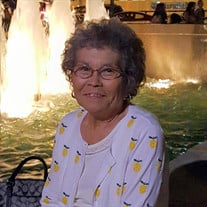 Tsuya M. Caruso was reunited with her son, John, and husband on August the 10th of 2020. She was greeted by a wealth of family and friends in the company of our Lord as they celebrated 89 years of accomplishments. Her incredible story began on July 2, 1931 in Tachikawa, Japan where her mom and dad instilled in and equipped her with an untiring work ethic, the love of culinary arts (later enjoyed by all), the gift of seamstressing, a true green thumb, and the love of family, above all else. She first met her husband, Ed, on base while working for the US Air Force in Tachikawa during the Korean war. They were later stationed in the Philippines for a short period of time before ultimately settling in South Jersey where she learned two new languages and raised a family of 5. Helping to ensure the success of the Caruso family farm, she spent long days tending to the crops. She was famous for her exquisite desserts and truly delectable dishes from both Italy and Japan, uniquely cooking both cuisines with chopsticks. She was an incredibly strong woman, and cancer was no match for her, as she beat it twice! Her strong network of Japanese wives with military husbands benefitted from her loyalty and relentless support through their cancer, trials, and tribulations. She literally broke her neck and back on different occasions, quickly recovered, and cared for her husband because that’s who she was. She always provided and did for others before herself. We will all miss her smiling face, unwavering motherly love, delicious gourmet dishes, and her heart warming laugh. Tsuya leaves behind three daughters, one son, a daughter in law, and son-in-law, plus six grandchildren and two great grandchildren. Son, Edward J. Caruso, Jr. and daughter-in-law Heather Burdine Caruso of Goose Creek, SC. Her daughters, Mary Cheeseman of Kingsville, TX; Angela Caruso and son-in-law Jeff Koskey of Pennsville, NJ and Josephine Caruso Rathe of Colorado Springs, CO. Tsuya was predeceased by her first son, John Anthony Caruso, in 1971 and her husband Ed in 2013. Her beloved grandchildren are Brenton Cheeseman and wife Anna of Houston, TX; Kimberly Cheeseman and husband Michael Dillon of Houston, TX; Miguel II and Seth Hernandez of Pennsville, NJ, Casey Spencer App and husband Douglas App of San Diego, CA; John Gonzalez and wife Laura of Colorado Springs, CO with great grandchildren Carmen and Rylan. Memorial Service to be held at a later date due to COVID-19.

Tsuya M. Caruso was reunited with her son, John, and husband on August the 10th of 2020. She was greeted by a wealth of family and friends in the company of our Lord as they celebrated 89 years of accomplishments. Her incredible story began... View Obituary & Service Information

The family of Tsuya M. Caruso created this Life Tributes page to make it easy to share your memories.

Tsuya M. Caruso was reunited with her son, John, and husband...

Send flowers to the Caruso family.