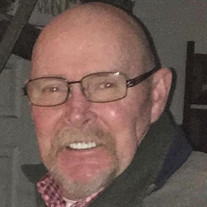 Thomas Allen Chafin, 70, of Pennsville, passed away peacefully September 30th at home with his loving family at his side. Born in West Virginia and raised in Virginia, he was a true gentleman of the South. He joined the United States Marine Corps in 1968, proudly serving his country. He remained a reservist, until an accident forced him to physically retire from the Corps in 1984. He was a truck driver for APA Transport for 22 years as well as other companies, including Nine West, until retiring due to illness in 2012. Travelling all over the world and enjoying his family was his passion. Always willing to drop everything to help fix a vehicle, quick with a story or to tell a never-ending joke… “Are you sure you haven’t heard this one?”. He knew how to make us all laugh and he kept our hearts full. Preceded by his parents Edward B. and Clara A. Chafin of VA, In-Laws Jacob and Marian (Johnson) Finger of NJ and Brother-In-Law James C. Mabe of VA. Tom is survived by his beloved wife of 49 years, Katherine (Finger) Chafin. His children: Sandy (Jim) White, Thomas “Kip” Chafin Jr. (Fiancée Heather Ferrel). His grandchildren who loved their Poppy dearly: Jacob (Raven), Joshua, Jarrod, T and Jordan. His sister, Connie M. Mabe of Moneta, VA, brother Edward B (Tamar) Chafin Jr. of Tazewell, VA, who were always supportive and encouraging of their little brother “Tommy”. Brothers and Sisters-In-Law: Larry (Susan) Finger, Edward (Donna) Friant, Debbie Wells, and many nieces, nephews, cousins and friends. A viewing will be held on Wednesday, October 6th from 10am until 11am at Ashcraft Funeral Home, 740 S. Broadway, Pennsville, NJ. Service will start at 11am. Interment will follow at the Salem County Veterans Memorial Cemetery, Pilesgrove, NJ with a luncheon afterward at the Salem County Sportsmans Club 273 Wiley Road, Carneys Point NJ 08069. www.ashcraftfuneralhomes.com

Thomas Allen Chafin, 70, of Pennsville, passed away peacefully September 30th at home with his loving family at his side. Born in West Virginia and raised in Virginia, he was a true gentleman of the South. He joined the United States Marine... View Obituary & Service Information

The family of Thomas Allen Chafin created this Life Tributes page to make it easy to share your memories.

Send flowers to the Chafin family.