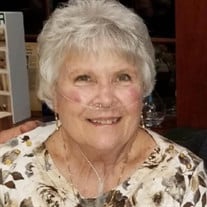 Theresa Kelly DiCarolis, age 70, of Pennsville, was surrounded by her family when she went home to be with the Lord on Wednesday, July 28, 2021 after a long, hard fought battle with complications from a lung transplant. Mrs. DiCarolis was born in Scranton, Pa and was adopted at 2 weeks old and moved to Carneys Point where she grew up and went to St. James and then onto Goldey Beacom College before meeting her husband Jim. She became an executive secretary for the Chesapeake Bay Girl Scout Council for many years and later for DuPont from where she retired. Theresa and Jim married June 3, 1972, had 2 children and raised their family in Pennsville, being a very active parent and never missing a sport that either of her children played from their youth years through their high school years-her kids were her pride and joy. Theresa’s hobbies included spending any time that she could with her family, going to the beach, listening to music, cooking, baking and loving on her furbabies. Theresa always put everyone first and before her, she will be remembered for not only being a strong and courageous woman, but also a loving, giving, family-oriented woman who cared strongly for her family and friends. Theresa was predeceased by her parents Jim and Theresa Kelly, She is survived by her loving husband of 49 years, Jimmy, her daughter Kelly Whitzell (Dale), her son Joe DiCarolis (Elizabeth), her granddaughters Amber Hans (Aaron) and Alyssa DiCarolis, her great granddaughter Chandler Hans and her 4 legged companion for the last 13 years, Molly. Relatives and friends are invited to her visitation on Monday, August 2, from 9:00-10:30 at the Ashcraft Funeral Home in Pennsville. Services will be at 10:30 in the funeral home with a luncheon immediately following at the Fraternal Order of Police in Pennsville. Theresa’s wishes were to be cremated, interment will be at a later date. In lieu of flowers, donations can be made to the S.P.C.A., Salem County Humane Society or the Pennsville Animal Shelter.

Theresa Kelly DiCarolis, age 70, of Pennsville, was surrounded by her family when she went home to be with the Lord on Wednesday, July 28, 2021 after a long, hard fought battle with complications from a lung transplant. Mrs. DiCarolis was... View Obituary & Service Information

The family of Theresa K. DiCarolis created this Life Tributes page to make it easy to share your memories.

Send flowers to the DiCarolis family.