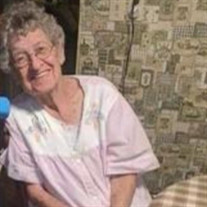 Theresa A. Brayerton, age 91, of Penns Grove, NJ, went home to be with the Lord on January 31, 2021. She passed away peacefully at home, the house in which she was born, surrounded by her loving family. She was the daughter of the late Joseph and Anna (Bingelis) Brozas. Theresa was a strong Christian woman of faith, with a love for the Lord, and she faithfully read her bible and daily readings. She attended St. James School. Theresa was a past member of The Church of Our Merciful Savior, where she taught Sunday School, and helped to prepare for social events in the church hall. Theresa had a strong love of family. Some of her greatest joys of family time together were backyard BBQs, Christmas Eve celebrations and summer visits to Sea Isle City with early morning walks on the beach to collect seashells. In earlier years, she loved working in her flower beds, while her husband tended to the vegetable garden, from which she canned and prepared many meals. She loved preparing her many favorite Lithuanian and Polish dishes while dancing to polkas around the kitchen. She also loved exploring for old glass bottles underneath the old willow tree in her backyard. Theresa's door was always open for a cup of coffee or tea with great conversations and laughs with family and friends. There are so many more wonderful memories that family will cherish and hold close in their hearts forever. Theresa is survived by: her sister- Mary Fleckenstein (Woodstown); Children- Joseph (Gail) Brayerton - Trenton; Charles (Marsha) Brayerton- Carneys Point; Robert Sr (Donna) Brayerton- Carneys Point; Helen (Robert) Conover- Pennsville; Michael Sr (Robin) Brayerton- Carneys Point. Grandchildren- Scott (Rebecca); Joseph Jr (Stephanie); Christopher; Angela; Charles Jr (Barbara); Michael; Barbara (Elliot); Victoria (Henry); Robert Jr (Corrie); Lori (Bill); Michelle (Earl); Melissa (Justin); Robert Jr (Wendy);Michael Jr and Tyler. Theresa also has thirty-seven Great-Grandchildren, two Great-Great-Grandchildren and several nieces and nephews. Theresa was predeceased by: her loving husband, Raymond Sr; her son, Raymond Jr; daughter in law, Kathleen; her sisters, Eleanor, Helen, Anna; and her brother, John. A graveside service will be held on Saturday February 6 at noon at Lawnside Cemetery in Pilesgrove, NJ. The family asks, in lieu of flowers, that a donation be made in Theresa's honor: c/o Theresa Brayerton's honor Penns Grove EMS Squad PO Box 254 Penns Grove, NJ 08069

Theresa A. Brayerton, age 91, of Penns Grove, NJ, went home to be with the Lord on January 31, 2021. She passed away peacefully at home, the house in which she was born, surrounded by her loving family. She was the daughter of the late Joseph... View Obituary & Service Information

The family of Theresa A. Brayerton created this Life Tributes page to make it easy to share your memories.

Send flowers to the Brayerton family.