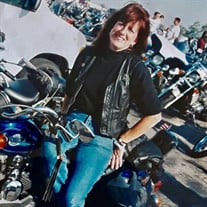 Sandra Lynn Roberts (nee James), 75, died on April 6, 2020, in Newark, Delaware as the song “Free Bird” by Lynyrd Skynyrd fittingly played in the background. An adventurous and untamed soul, her loss leaves a one-of-a-kind void in the lives of those that love her. Sandy was born on March 18, 1945, in Salem, New Jersey and spent the rest of her life in Pennsville. Even from a young age, Sandy stood out as smart, athletic, and friendly. She enjoyed playing basketball and participating in Girl Scouts, even attending the Great Girl Scout Roundup in Wyoming in 1959. She graduated from PMHS in 1962 with a scholarship to Douglass College and was voted Best All Around by her class. After marrying and having her first child with her former spouse William H. Roberts, Jr., she worked for Dupont at the Experimental Station as a Lab Technician in 1964. In 1968, she was one of the earliest female mail carriers at the Pennsville Post Office. She initially faced a bit of difficulty as both dogs and people seemed to take some time to warm up to the idea of a female mail carrier, she learned that by holding firm against these obstacles (and carrying dog spray) she would be able to keep moving undeterred. She and the other female carriers successfully paved the way for the advancement of women in the USPS in the 1960’s. Sandy continued delivering mail on foot in Pennsville during her next 3 pregnancies and then eventually moved to the Deepwater Post Office in the early 1980’s where she worked as a clerk for many years. She retired from the Post Office in 2010. Never one to sit still for long, she picked up a part-time job at Home Depot in Christiana, DE from 2012-2017 in order to stay busy and to talk and interact with people. As a mother, Sandy was protective and devoted, supporting her kids 100%. Whether it was pageants, baton, gymnastics, guitar, or dirt biking, she was all-in: sewing gowns, driving back-and-forth to practices, hopping on the dirt bike next to you. She was never a woman who did things halfway and she made sure that her kids didn’t either. She was a progressive mom who rarely told her kids what to think; she lived by the beat of her own drum and empowered her children to do the same. She always expected and encouraged her kids to pursue what they wanted as far as activities or careers, not worrying about traditional gender roles or even discussing those possible obstacles as reasons not to pursue something. Sandy was multi-faceted, with a deep-seated love of learning and trying new things. While raising her four children and working full-time, she earned Associate’s Degrees in Computer Science and Math at Salem Community College, and also took additional classes in glassblowing for fun. For several years, she was a dedicated line dancer who taught at local country bars and frequented the rodeo. Then she became an avid snowmobiler, traveling frequently to Maine and the New England area with her sled. Eventually she found Harley Davidson… and her search for a perfect hobby ended. Riding Harleys was what a fearless, free-spirited woman like Sandy was meant to do. But she sure as hell didn’t ride on the back! Sandy believed women could do anything men could — only better — and was one of only a few women among her friends who rode their own bike. For years, she traveled to bike weeks in Daytona and participated in numerous poker runs in the NJ and Delaware areas for various charities sponsored by the Penns Grove Elks. She kept riding her Harley until late in life and only stopped because her kids begged her to. In addition to tearing around the country with the wind in her hair, Sandy enjoyed doing puzzles, spoiling her pug, Daisy, and reading voraciously, especially Stephen King novels. She was enthralled by the fervor of politics, and probably knew every cable news network anchor by name. She loved watching her grandchildren grow up and hearing the details of their escapades. If there’s one thing everyone will remember about Sandy, it’s that she was fiercely independent and determined, never allowing anything to stand in her way. She had a love for life and you could always rely on her to make friends with anyone. She was crazy and wild and fun-loving, yet she could also exude a calm confidence when needed. You knew you could count on Sandy for anything, including genuinely speaking her mind! Sandy’s colorful personality made a lasting impression on this earth. She was so much to so many: a dedicated mother; a loyal friend; a stubborn, strong-willed fighter; a lover of good dirty jokes and memes; an expressive person who never stopped talking. And now that she has left us — heading off into the great unknown, undoubtedly with classic rock blaring — she will be missed by all who knew her. Sandy is predeceased by her son, William (Bill) E. Roberts, and her parents, Edward and Anabel (Shimp) James, all of Pennsville, NJ. She is survived by her children, Sheryl Emmons (Rob) of Pennsville, NJ, Lauri Cox (Michael) of Middletown, DE, and Daniel Roberts (Mary) of Macomb, MI, a beloved daughter-in-law Cynthia Roberts of Pennsville, NJ, and a brother, Edward (Ned) James. She is also survived by 13 grandchildren (William, Stephanie and Julie Roberts; Gina and Rachel Bradford; Peter, Jordan, Madison, Skylar and Leighton Cox; Adam and Amelia Birch, and John Roberts, in addition to five great-grandchildren. Out of an abundance of caution, services will be performed graveside at Lawnside Cemetery at 10 AM ET, on Saturday, September 4, 2021, located at 1017 Route 40, Pilesgrove, New Jersey, 08098 (264 A Summit Terrace, Lot #6). Please come to pay respects to Sandy, visit family, and share memories. In lieu of flowers, the family has requested in-memoriam donations to American Society for Prevention of Cruelty to Animals (ASPCA). Please click the link below to donate to ASPCA in Sandra's memory. https://secure.aspca.org/donate/ps-memory-sl-p1?ms=MP_PMK_GooglebrandMemorialSL-T4&initialms=MP_PMK_GooglebrandMemorialSL-T4&pcode=WEBMEMORYSLPPC&ds_rl=1066461&gclid=CjwKCAjwmqKJBhAWEiwAMvGt6GH-kJErgWJwIGi2EPKdUieJeSeGBaefNfLLW4lW-8IdcrRY2UYbjBoC4YUQAvD_BwE&gclsrc=aw.ds

Sandra Lynn Roberts (nee James), 75, died on April 6, 2020, in Newark, Delaware as the song &#8220;Free Bird&#8221; by Lynyrd Skynyrd fittingly played in the background. An adventurous and untamed soul, her loss leaves a one-of-a-kind void in... View Obituary & Service Information

The family of Sandra Lynn Roberts created this Life Tributes page to make it easy to share your memories.

Send flowers to the Roberts family.