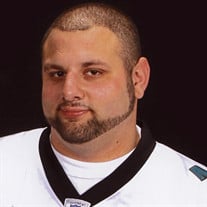 Samuel “Sam” Edward Frame IV, of Pennsville, New Jersey, unexpectedly departed the earth on January 29, 2020. Sam was born on December 7, 1982, in Bryn Mawr, Pennsylvania. After graduating from Brandywine High School in 2002, Sam moved to Claymont, Delaware, where he met the love of his life Amy Frame in 2007. Sam and Amy were married on March 20, 2009, and their family was complete when Sam and Amy welcomed their son Benjamin Frame on October 12, 2009. Sam’s hobbies included cheering for the Philadelphia Eagles, fishing, and playing Minecraft with his son. He was a member of the pole-benders fishing club. He was proud to call himself the “master-baiter.” He currently holds the club record for catching the largest flounder. He will best be remembered for his infectious laugh and caring personality. Sam would always go out of his way to do things for others. He made his family his first priority and would tell everyone he was the luckiest man in the world because Ben was his son and Amy was his wife. His love for these two will live on in the memories they made and the laughs they shared. His son has also created a Minecraft world in his memory and honor. Sam’s final act of kindness was a donation to Gift of Life to provide countless life-transforming gifts to others. To pay tribute to Sam remember to always make a phone call or send a text, forgive, tell people that you love them or that you’ve missed them, let go of grudges, and show more kindness. Most importantly, do not take anything for granted, because tomorrow is not promised. Sam is survived by his wife, Amy Frame; son, Benjamin Frame; parents, Sam Frame III and Terry Sipple (Jack); sisters Jessica Frame, Deidra McNatt, and Stacey Rohrer; and in-laws, Edward and Donna Szubielski. A memorial service will be held at Ashcraft Funeral Home, located at 740 S. Broadway, Pennsville, NJ 08070, on Friday, February 7, 2020 at 11:00 a.m., with a visitation from 9:30 – 11:00 am. At the request of Amy and Ben, please wear your Philadelphia Eagles gear or other casual clothing. Sam’s ashes will be spread in the Florida Keys at a later date, so that he will be free to fish whenever he wants. www.ashcraftfuneralhomes.com

The family of Samuel Edward Frame IV created this Life Tributes page to make it easy to share your memories.

Send flowers to the Frame family.