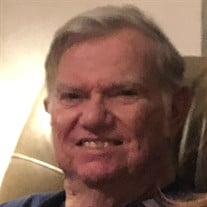 Robert "Binky" Wetzel, 78, of Pennsville passed peacefully on April 14th, with his family by his side. Binky was a lifelong resident of Deepwater, where he went on to marry his late wife Connie and raise his four girls, in which he adored. Binky and Connie were married for 50 years before her passing in April of 2014. Binky was a lifelong member of the Deepwater firehouse. He was a truck driver his entire life, retiring from Lacy's Express in 2012. Binky shared the love of the Philadelphia Phillies with his late mother Emily. He enjoyed road trips with his wife along with their best friends, Bob and Florence Reed. In his free time you could find him tinkering in the yard or painting something in fine detail. "PopPop" lived for his children, grandchildren but especially his great grandchildren. They kept him young and he enjoyed every minute. You could always find him with a smile when they were around. Binky is predeceased by his wife, Connie, his mother, Emily, grandparents, Elizabeth and William, brother, Jonny, aunt, Wilma, uncle, Mike and great grandson, Ryder Robert. "PopPop" is survived by his four daughters: Brenda Livingston (Marty), Gloria Dalbow (the late Ed), Patsy Maltman (Larry) and Connie Wetzel-Mumink (Mark). Grandchildren: Tina (Eddie), Willie (Kyle), Brittany, Tara (Ryan), Markie, Brandon, and Kristen. Great Grandchildren: Miley, Savanna, Maddie, Emma, Stella, Rj, Daxton, Everly, Makayla and Aiden. Brothers: Harry (Sharon) and Darryl (Robin). Sisters: Nancy, Diane (Michael), Wilma (Deb) and Linda (Chip). The family would like to thank his best friend, Bob Reed for the outpouring of love and generosity over the years but especially the last few years. Dad appreciated and loved you tremendously. Relatives and friends are invited to his visitation on Tuesday April 19th, from 10:00-11:00am, at Ashcraft Funeral Home, 740 S. Broadway, Pennsville NJ 08070. Service to follow at 11am. Burial will be held at Lawnside Cemetery, Woodstown NJ. The family asks that you wear your Phillies attire.

Robert "Binky" Wetzel, 78, of Pennsville passed peacefully on April 14th, with his family by his side. Binky was a lifelong resident of Deepwater, where he went on to marry his late wife Connie and raise his four girls, in which he adored.... View Obituary & Service Information

The family of Robert "Binky" Wetzel created this Life Tributes page to make it easy to share your memories.

Send flowers to the Wetzel family.