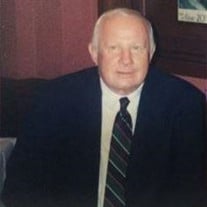 Robert Lee Herrman, beloved husband and father, passed away peacefully on August 17, 2018 in San Juan Capistrano, California at the age of 89. He was born on May 12, 1929 in Carneys Point, New Jersey. The son of the late Lee and Dorothy (Coleman) Herrman, he attended Penns Grove Regional High School (Class of 1947) and was a graduate of Washington College in Chestertown, Maryland. He married his high school sweetheart, Mary Jane Sadler on June 16, 1951. In 1973 Bob’s employment with Astra Zeneca brought his wife, children and him from their home in Wilmington, Delaware to Glendora, California. The couple resided there until his retirement and their move to Palm Desert, California in 1989. In retirement he enjoyed his days playing golf and watching the sunset from his back patio with a Manhattan in his hand. For Bob, family was everything. His true joy was spending time with their four sons and their families which includes eight grandchildren and five great-grandchildren. Everyone cherished their fun times with Pop-Pop. He is survived by his loving wife of 67 years, Jane; his four sons and their spouses, Bob/Carmen, Steve, Don/Debbie and Wayne/Sharon; his grandchildren Marissa, Matthew, Jonathan, Rachel (Leslie), Michael, Kelly, Ryan and Bobby; his great-grandchildren Abigail, Joseph, Shane, Brixton and Knox; his in-laws Ed and Nancy Sadler, his nieces Lynn (Ashcraft) Davidson, Barbara Dee Ashcraft and Linda Sadler and his nephews John Ashcraft and Steve Sadler. In addition to his parents, Bob was preceded in death by his sister, Dorothy Ashcraft. A grave-side memorial will be held on Saturday, September 1, 2018 at 1:00 pm at Oakdale Memorial Park and Mortuary, Glendora, California. Donations in his honor can be made to each individual’s favorite charity or cause. [email protected]" title="Click to open in a new window or tab" target="_blank" rel="nofollow noopener">[email protected]

Robert Lee Herrman, beloved husband and father, passed away peacefully on August 17, 2018 in San Juan Capistrano, California at the age of 89. He was born on May 12, 1929 in Carneys Point, New Jersey. The son of the late Lee and Dorothy (Coleman)... View Obituary & Service Information

The family of Robert Lee Herrman created this Life Tributes page to make it easy to share your memories.

Send flowers to the Herrman family.