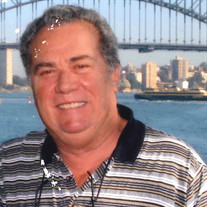 Robert Edwin Epps, age 82 of Pennsville, NJ passed away peacefully at home on Monday, October 4, 2021. Bob was born October 28, 1938 to Alice Moreash Epps and Isaac Pressley Epps (deceased) in Pennsville, New Jersey. He is predeceased by his sister, Verona Epps Wolfer and daughter, Tami Epps Ottinger. Bob is survived by his loving wife Judith (Vinyard) Epps of 41 ½ years (together for 44 years), his daughters Kimberly Burkentine (Robert), Kristi Epps Wolfer, his sister Evelyn Epps Hillman, his brothers Fredrick Epps (Jean), and Thomas Epps, his 6 grandchildren, Brooke Ottinger, Amber Burkentine, Taylor Burkentine, Savanah Burkentine, David Henley, Nikole Johnson (Brandon), and his 7 great grandchildren, Lucas, Logan, Linkoln, Jaxon, Liliana, Aubree, Everleigh. Bob was a graduate of Penns Grove High School Class of 1956. He proudly served in the US Navy on the USS Courtney DE 1021 from 9/24/56 to 10/20/59, RM (E4 Class A). Upon his return from the Navy, he worked at DuPont Chambers Works for 32 years as an electrician until he retired in 1996. While working at DuPont, he enjoyed playing softball on the DuPont leagues and also in the Pennsville over 35 and 40 traveling softball leagues. He was an active member of the Salem County Sportsmen's Club for over 40 years and after retirement, he was on the Tuesday Work Crew. He joined the Penns Grove Masonic Lodge on 12/3/86 and then joined the Pennsville Forrest #10 of the Tall Cedars of Lebanon. Bob then became a Tall Cedar Clown and enjoyed traveling around to different events to help raise funds for research for Muscular Dystrophy. He was also on a committee for 5 Supreme Tall Cedars of North America. Bob and his wife Judy enjoyed traveling and going on cruises. They have traveled to Germany, Austria, Australia, New Zealand and Fiji. A visitation for family and friends will be held Saturday, October 9 from 9:30 am to 11 am with a service following at 11 am at Ashcraft Funeral Home, 740 South Broadway, Pennsville NJ. Burial will follow at Lawnside Cemetery in Pilesgrove. In lieu of flowers, memorial contributions may be made to the American Lung Cancer Society or Union Presbyterian Church, 254 Shell Road, Carneys Point, NJ 08069. www.ashcraftfuneralhomes.com

The family of Robert Edwin Epps created this Life Tributes page to make it easy to share your memories.

Send flowers to the Epps family.