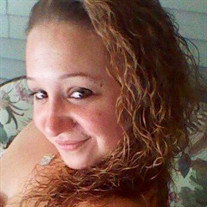 Rachel Marie Scott, 32, of Carneys Point passed away on October 23, 2015. Born in Wilmington, DE to Eric and Rosemarie (nee Greway) Scott, Rachel attended St. James High School until its closure and graduated from the Salem County Vo-Tech School in 2001. Rachel was a member of the ROTC program which prompted her to enlist in the United States Navy shorty after graduating. She was stationed in Virginia Beach, VA, which she claimed was her second home. It was here that she married Fidel Cortez and soon became a mother to Sammy, Stephanie and Fabian Cortez. Rachel loved spending time with her children, family and closest friends. Those closest to her described her as a wonderful listener whose smile lit up the room. She loved singing and dancing, getting manicures and cheering on the Dallas Cowboys. She is survived by her husband Fidel Cortez, her mother Rosemarie (nee Greway) Scott, her children Samuel, Stephanie and Fabian, her grandmother Hildegard Greway, her sister Erica Scott and many aunts and uncles, cousins and friends. Rachel was preceded in death by her father, Eric Scott and paternal grandparents, Samuel and Janet Scott. A viewing will be held Friday evening from 7:00 to 9:00 PM in the Ashcraft Funeral Home, 47 State St., Penns Grove. A Mass will be celebrated at 10 AM on Saturday in The Church of Our Mericiful Saviour, E. Maple Ave., Penns Grove. Interment will follow in Eglington Cemetery, East Greenwich. In lieu of flowers, memorials may be made at www.woundedwarriorproject.org. www.ashcraftfuneralhomes.com

The family of Rachel Marie Scott created this Life Tributes page to make it easy to share your memories.

Rachel Marie Scott, 32, of Carneys Point passed away on October...

Send flowers to the Scott family.