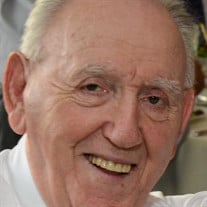 Pietro M. Traini, known to everyone as “Pete”, passed away on October 18, 2018, at the age of 90. Born in Camden, NJ, on November 3, 1927, Pete was the son of Vincenzo and Margaret (DiMarcantonio) Traini. Raised in Penns Grove, NJ, where he lived his entire life, Pete served in the United States Navy from 1945-1947 on the USS Munsee as a Fireman Second Class. While in the Navy he also participated in the atomic bomb tests on Bikini Island. After working two years for the E.I. duPont company, Pete joined the United States Air Force and served from 1949-1952 as an Airman First Class. While stationed in Tripoli, Libya, Pete met Wanda Aspasini. Pete and Wanda were married in Naples, Italy on January 17, 1954. Returning to the states, Pete once again went to work for the E.I. duPont Chambers Works plant from 1954 to1984 mostly in the Tetra Ethyl lead area. He also liked to work side jobs installing windows and new roofs for people in the area. Pete’s passions were being with people, story-telling and donating daily to his favorite charity, Delaware Park. He was best known for his sense of humor, positive attitude and never having a bad word to say about anyone. Pete is survived by his daughters: Ida Bowen (Joseph), Debra Hazlett (James), and Lorraine Aeschliman (Vernon); Sons: Vincent, Peter, and John (Mary). Grandchildren: Joanna Weinreich (Matthew), Nicholas Bowen (Lauren), Christopher Passarella (Gabrielle), Andrew Aeschliman (Rachel), Lauren Aeschliman (Jack), Victoria Traini, and Julianna Traini. Great Grandchildren: Joseph and Dominic Weinreich, Addison and McKenna Bowen. Pete is also survived by his sisters Elvira (Dolly) Bowe and Gloria DeFrank (Joseph) as well as his sister-in-law Dirce Aspasini and brother-in-law Gianni Aspasini (Shirley) along with many nieces and nephews. He was predeceased by his beloved wife of 51 years, Wanda (Aspasini) as well as his parents. A special thank you to the wonderful Bayada Hospice nurses and aides. A viewing will be held on Monday October 22 from 6 to 8 PM in the Ashcraft Funeral Home, 740 S. Broadway, Pennsville. Mass of Christian Burial will take place at 10 AM on Tuesday October 23 at St. Gabriel the Archangel Roman Catholic Church, 369 Georgetown Road, Carneys Point. Interment will be at the Salem County Veterans Cemetery, Pilesgrove. www.ashcraftfuneralhomes.com

The family of Pietro M. Traini created this Life Tributes page to make it easy to share your memories.

Pietro M. Traini, known to everyone as “Pete”, passed away on...

Send flowers to the Traini family.