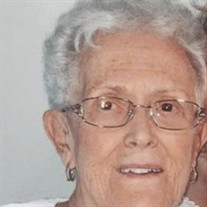 Nelva Jane Herrman Schermerhorn, age 83 of Pennsville, NJ passed away on Saturday, November 21st, 2020 surrounded by her loving family. She was born on September 15, 1937 to Macie Phelps Herrman and Norris Elmer Herrman. An accomplished young woman, she graduated from Regional High School of Penns Grove at the age of 16, and in her pursuit to help others, attended nursing school in Philadelphia. Her love for family exceeded all else and she chose to leave nursing school after one year to work and support her widowed mother. Nelva worked at DuPont for 36 years, playing a significant role in implementing the MOSS system in the Agricultural Division, and retired as a Manager in the Agricultural Department, a position that she was extremely proud of. Nelva married Grant L. Schermerhorn on January 11, 1957, celebrating 63 years of marriage this year. She was inducted into The Eastern Star in 1975, belonged to Beta Sigma Phi Sorority for 58 years, and, continuing her interest in service, volunteered at Salem County Hospital Auxiliary and was on the hospital committee. A member of the Church of Nazarene-Pennsville, she was heavily involved in planning and executing weekly events, as well as serving on retreats and mission trips. She was an avid traveler, visiting all 50 states with her family on their cross-country motorhome trips, and traveling to numerous islands in the Caribbean and countries in Europe, including France and the Netherlands. Nelva also looked forward to spending time with her close-knit sorority on their skiing trips. A Breast Cancer Survivor, she lived life to its fullest. Nelva raised three outgoing children and lived to attend her five grandchildren’s activities and achievements, to which she proudly boasted to anyone who would listen. To her, becoming a great-grandmother to five great-grandchildren was one of her greatest blessings. It is difficult to imagine all other milestones we will not be able to experience with her. A strong woman of faith and family, she is already greatly missed. She is survived by her husband Grant L Schermerhorn Jr., sister Gladys Peterson, three children Bruce Shermerhorn (Mark), Cynthia Roeske (Alfred), and Danel Hultberg (Michael), five grandchildren Amanda Hoyt (Mike), Alfred Roeske III (Brittany), Megan Hultberg, Ryan Hultberg, and MacKenzie Hultberg, and five great-grandchildren Declan Hoyt, Delaney Hoyt, Kye Roeske, Finnegan Roeske, and Atlee Roeske. A Graveside Service will be held at 11:00 am on Saturday, November 28th, 2020 at Lawnside Cemetery in Woodstown, NJ. Contributions can be made in her memory to Myelodysplastic Syndromes Foundation (MDS) https://www.mds-foundation.org/donate/.

The family of Nelva Schermerhorn created this Life Tributes page to make it easy to share your memories.

Send flowers to the Schermerhorn family.