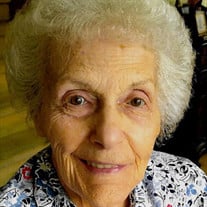 Muriel Cole Hubschmitt, age 86, of Pennsville,NJ, passed away on Monday October 2, 2017 at home after a long illness surrounded by her friends and family. Muriel was born in Trenton, NJ on March 27, 1931 to the late Manola and Herbert Cole. She also resided in Westville, NJ and Dover, DE but spent most of her life in Pennsville, NJ. In 1949, she graduated from Woodbury High School in NJ and took business classes at Goldey Beacom in Wilmington, DE. Muriel worked at Bell Telephone in Woodbury, Bond Linen Store in Salem, NJ and Strawbridge & Clothier at the Christiana Mall in Delaware. Although she worked outside the home, she considered her main responsibility in life to be the caring of her husband and the nurturing of their 3 children. She worked hard to prepare the children to be fine upstanding adults. Her success is reflected in the caring and successful people they have become. She continued with her commitment by setting the same example for her 3 grandchildren. Muriel is survived by her husband H. Raymond Hubschmitt; her children Steven Hubschmitt and his wife Sandra Messick, Sandy Owens and her husband Jeff, and Janet Spencer and her husband Jeff; her grandchildren Laura Stringer, Lindsay Neary, and Justin Hubschmitt; and her great grandchildren Samantha Stringer, Noelle Salvo, Jordan Salvo and Isaiah Stringer. She is survived by her brothers Jack Cole, Paul Cole, and Phillip Cole and her sister Sarah Brown. Her siblings Edward Cole and Patricia Marks predeceased her. A memorial service will be held Saturday October 7, 2017 at 11 am at the Union Presbyterian Church, 254 Shell Road, Carneys Point, NJ 08069. Tributes and condolences can be made at Ashcraft Funeral Homes at www.ashcraftfuneralhomes.com. In lieu of flowers, donations can be made to the Union Presbyterian Church.

Muriel Cole Hubschmitt, age 86, of Pennsville,NJ, passed away on Monday October 2, 2017 at home after a long illness surrounded by her friends and family. Muriel was born in Trenton, NJ on March 27, 1931 to the late Manola and Herbert... View Obituary & Service Information

The family of Muriel Cole Hubschmitt created this Life Tributes page to make it easy to share your memories.

Send flowers to the Hubschmitt family.