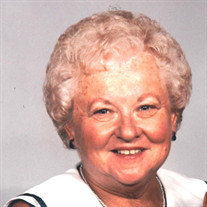 Mildred A. “Millie” Logiovino, née Marcus, fell asleep in death at her home in Pennsville on Tuesday, August 3, 2021. She was 87 years old. Millie was predeceased by her loving and devoted husband Anthony, her parents Joseph and Casimir Markowitz, and her sister Frances Winfield. She is survived by her three children, Kathleen A. Brolley (Patrick), Anthony L. Logiovino (Peggy), and Michael J. Logiovino. She also leaves behind grandchildren, Kara M. Winarski (Aaron), Colin P. Brolley (Brittany), Anthony L. Logiovino, Jr., Heath M. Logiovino, and Ethan A. Logiovino; as well as step-grandchildren, James C. Doughty (Rebecca), Christine A. Haddock (Michael), Brian Devonshire, and Brynn S. Gomez (Jesse); and great-grandchildren, Lilliahna Haddock, Jesse and Jacob Gomez, and Madeline Doughty. Millie was born and raised by immigrant parents in Penns Grove, New Jersey. She graduated from Penns Grove Regional High School in 1951, then married the love of her life, Anthony, on June 19, 1954. They raised their three children in the home that he built in Carneys Point, until he was transferred to Fayetteville, North Carolina, by DuPont in 1978. There they made many good friends and enjoyed their vacation home at Holden Beach. After Anthony’s death, Millie returned to New Jersey and resided in Pennsville where she enjoyed friends old and new, watching her grandchildren grow, and attending high school class luncheons and Senior Saints meetings. The funeral service for Millie will be held at 11 a.m. on Monday, August 9, at Ashcraft Funeral Home, 740 S. Broadway, Pennsville, followed by interment at Lawnside Cemetery in Pilesgrove. A visitation for family and friends will be held at the funeral home on Monday from 10 a.m. until 11am. Face masks are required to gain entrance into the funeral home per the family's request. In lieu of flowers, please remember Millie by contributing to your favorite charity.

Mildred A. &#8220;Millie&#8221; Logiovino, née Marcus, fell asleep in death at her home in Pennsville on Tuesday, August 3, 2021. She was 87 years old. Millie was predeceased by her loving and devoted husband Anthony, her parents Joseph and... View Obituary & Service Information

The family of Mildred A. Logiovino created this Life Tributes page to make it easy to share your memories.

Send flowers to the Logiovino family.