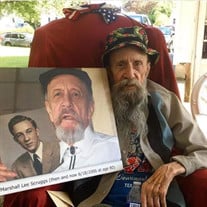 Marshall Lee Scruggs, 90, passed away peacefully in his sleep at Christiana Hospital, Delaware, on January 30, 2017. Marshall was born in 1926 in southern Virginia, Whittles, Pittsylvania County, to tobacco farmer, Matthew Brown Scruggs and Martha Jane Clark Scruggs. In 1936, for a new start in life during the Great Depression, he moved with his family to a primitive log cabin on the banks of Moon Creek between Providence and Purley, Caswell County, North Carolina. Later in 1944, his father and Uncle Jeter Scruggs were able to purchase a farm in Providence and each owned a part on each side of the road. Marshall graduated high school in the spring of 1944 and attended US Naval Training Center (Navy “Boot Camp”) in Bainbridge, MD in November 1944. He was selected to train in cryptology at the Naval Security Station (NSS) in Washington DC where he became a Communications Technician Specialist “Q-A”. He was assigned to Field Radio Unit Pacific (FRUPAC). Marshall reported for duty at Station HYPO in Pearl Harbor, Hawaii in July of 1945 where he served running the switchboard for the unit transmitting messages as they were decoded. He was promoted to Yeoman 3rd class in 1945 and honorably discharged from the USN in May 1946 at War’s end. In August 1946, Marshall enrolled at East Carolina Teacher’s College (now East Carolina University) under the G.I. Bill. He joined the US Naval Reserves and attended summer school to receive an accelerated business degree in May of 1949. US Navy Intelligence recalled him to duty in Washington DC in 1950 at the start of the Korean War. Soon after, he was assigned by NSS to the Navy Security Radio Group (NAVSECGRU) in Dupont, South Carolina. He continued to serve at “Radio Dupont” at the rank of Yeoman 3rd class until 1951 before applying for Officer’s Candidate School (OCS). He was a member of Company C, the class of 1951, and commissioned the rank of Ensign. After an initial assignment as a courier at the Pentagon, he was once again assigned to the Naval Security Service in Washington DC as a cryptologist. Later, after the Korean War, Marshall continued service in the US Naval Reserves where he achieved the rank of Lieutenant while working for the NSA. He retired from the Navy in 1968 after completing 21 years of service at the age of 42. After his 1953 release from the Navy, Marshall married and with Mary Jane moved from Washington, DC to New Jersey, ultimately settling in Pennsville, where he worked as a Cost Accountant (and as an Emcee for retirement parties) at DuPont Chambers Works for 28 years at Petroleum Lab, and Jackson Lab retiring in 1982. He also worked part-time as a night auditor at the Holiday Inn in Carneys Point. Marshall is survived by his former wife, Mary Jane Scruggs; children, Michael (Christine) Scruggs of Newark, DE; Laura Scruggs (Bill Johnson) of Bridgeton, NJ; Matthew (Audrey) Scruggs of Los Angeles, CA; and Christine Scruggs Hooks of Pennsville, NJ. He is also survived by grandchildren, Michael Lee, Jr. (Sheree) Scruggs; Jason (Stephanie) Scruggs; Steven Scruggs; David Scruggs; Christen Hooks; Lauren Hooks; Timothy Klumpp; and Meaghan Hurr; great grandchildren Abby; Jagger; Ny'Yana; Madeline; Evan; Joseph; and Thomas, as well as many nieces and nephews. Marshall was predeceased by his parents; and brothers and sisters, Linwood Scruggs; Mathew Ray Scruggs; Joseph Neal Scruggs; Casper Hamlet Scruggs; Esther Scruggs Day; and Ruby Scruggs Goforth. Funeral services will be held 11 AM Friday in the Sharptown Methodist Church Chapel, 24 Church Street, Pilesgrove, NJ where there will be a viewing from 9:30 to 11:00 AM. Interment will follow in Overlook Cemetery in Bridgeton, NJ. In lieu of flowers, the family suggests contributions to the Salem County Humane Society, PO Box 214, Penns Grove, NJ 08069.

The family of Marshall Lee Scruggs created this Life Tributes page to make it easy to share your memories.

Marshall Lee Scruggs, 90, passed away peacefully in his sleep...

Send flowers to the Scruggs family.