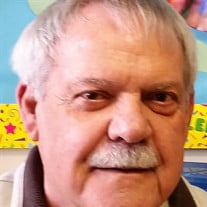 Marlyn L. Newcomer, age 75, of Woolwich township, formerly of Pennsville, NJ and York, PA, passed away on April 3, 2017 in the comfort of his home. Marlyn was born in 1941, in Windsor Township, PA, the son of Noah and Jennie (Glatfelter) Newcomer. He graduated from Red Lion High School, Red Lion, PA in 1959. He worked briefly as a rural mail carrier for the York post office, before joining the International Brotherhood of Electrical Workers and beginning a career as a welder and welding engineer. As a welding engineer for Bechtel, he relocated to Pennsville, NJ in 1977 and worked at the Hope Creek Nuclear Power Plant until he retired in 1987. Upon retirement he became active in education and youth programs, serving as a member of the Pennsville Township Board of Education, Pennsville Recreation Committee, and a 20-year member of the Pennsville Municipal Alliance on Substance Abuse. He was an inspiration for the creation of The Loft (formerly The Teen Center), and was instrumental in its establishment and administration during the founding years. Marlyn also served in the Army National Guard, and was a Free Mason for 43 years. Marlyn is preceded in death by parents and his brother Mervin E. Newcomer. He is survived by his wife of 50 years, Mary Ann (Wilson) Newcomer, his daughter Charisse (Newcomer) Rossi and son-in-law Dino Rossi, and beloved granddaughter Giuliana. Two memorial services are planned for family and friends. A visitation will be held on Friday, April 7, at Ashcraft Funeral Home, 740 South Broadway, Pennsville, NJ 08070 from 10-11am followed by a memorial service at 11 am. On Monday April, 10, a visitation will be held from 10-11am at Christ United Methodist Church, 5 Main Street, Yorkana, PA 17406, followed by a memorial service at 11 am. Interment of ashes will be private. In lieu of flowers, memorial contributions can be made in the name of Marlyn Newcomer to the Masonic Villages of Pennsylvania, c/o Office of Gift Planning, One Masonic Drive, Elizabethtown, PA 17022 to be used for the Masonic Charities Fund. www.ashcraftfuneralhomes.com

Marlyn L. Newcomer, age 75, of Woolwich township, formerly of Pennsville, NJ and York, PA, passed away on April 3, 2017 in the comfort of his home. Marlyn was born in 1941, in Windsor Township, PA, the son of Noah and Jennie (Glatfelter) Newcomer.... View Obituary & Service Information

The family of Marlyn L. Newcomer created this Life Tributes page to make it easy to share your memories.

Send flowers to the Newcomer family.