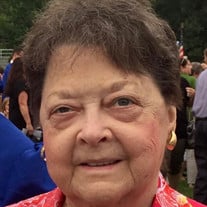 Margaret Susan Malone Lake, age 78 of Pennsville, N.J. passed away peacefully at home on Thursday, June 18th, 2020, surrounded by her family. Born on October 25th, 1941 to Ashland Francis and Ruth Moffett Malone, Sue grew up in Carneys Point, NJ where their home was filled with generations of family. After graduating from Penns Grove Regional High School in 1959, Sue went to work for Bell Telephone. In 1961, she married the love of her life, William Lake, and moved to Pennsville where they raised their two daughters, Lynn and Ann. Sue was a homemaker until returning to the workforce in 1980. For the last 22 years, she worked for ONLC Training Centers in Wilmington, DE where she was the first face their customers and employees would see each morning. She loved working there with her daughter Ann, but the real joy came after work where she would attend every ball game, concert and competition in which her grandchildren were involved. Even as her eyesight failed and her steps slowed, she always wanted to be there to cheer them on. Something that made Sue the happiest was that each year she and her family would plan a vacation at the ocean or on a lake and her grandkids would not only agree to go, but wanted to go. They would start planning their activities and special meals months in advance and loved including her in their evening games. Sue is survived by her daughter Lynn Lake Cafaro (Jay), her daughter Ann Louise Lake, her sister Ann Malone (Bob), her brother Robert Sheppard (Laura), her grandchildren Anthony Cafaro (Lindsay), Alyssa Cafaro (Michael), and Dominic Cafaro. Sue was also blessed with numerous nephews, nieces, sisters/brothers-in-law, cousins, and friends/coworkers that were like family. Sue was predeceased by her husband Bill in 1985. Due to the pandemic, services will be private. Sue will be laid to rest next to Bill at Eglington Cemetery. In lieu of flowers, donations can be made to Union Presbyterian Church Memorial Fund, 254 Shell Rd, Carneys Point, NJ 08070. Arrangements are made by Ashcraft Funeral Home.

The family of Margaret Susan Malone Lake created this Life Tributes page to make it easy to share your memories.