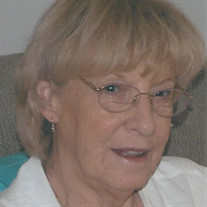 Lola I. (Angleberger) Murphy 1937 - 2016 Lola I. (Angleberger) Murphy, 78, of Newark, DE passed away peacefully on March 2, 2016, surrounded by her loving family. Lola was born in Thurmont, Maryland on June 26, 1937. She graduated from Thurmont High School in 1955. Lola moved to Penns Grove, NJ in 1957. She was also a long-time resident of Pennsville, NJ where she raised her sons. She attended Salem Community College and obtained a degree in Cosmetology. She was employed at Data’s Beauty Salon, until 1980. Lola went to work at BCBS of Delaware from which she retired in 1996. She then worked for Hospital Billing & Collections in New Castle, Delaware until 2003. Lola is survived by her devoted husband, Raymond Murphy, Sr., sons, Mark A. Anderson of Pennsville, NJ and Kurt R. Anderson and wife Cyndee of Carneys Point, NJ. She was preceded in death by her parents, Worthington and Alma Angleberger, brother Allen Angleberger and former husband, Cooper H. Anderson. She is survived by twin sister, Lela Weaver and husband, David of Gettysburg, PA, brother, Carl Angleberger and wife, Jeanne of The Villages, FL, and sister-in-law Frances Angleberger of Thurmont, MD. Lola is also survived by grandson, Ryan W. Anderson of Florida and granddaughter Colleen Nevish of Glen Mills, PA, great-grandchildren, Danni Smith, Cohen Sutton and Eleanor Grace Nevish. Lola is also survived by four stepchildren, Charlotte Simpson and husband, Butch, Darlene Guyer and husband John, Raymond L. Murphy, Jr. and companion, Sharon Denton and Michael Murphy. She is also survived by grandchildren, Alyse, Renee, Michael, Stephen, and great grandson, Joshua. Services will be private. In lieu of flowers, donations may be made to the Alzheimer’s Association. www.ashcraftfuneralhomes.com

The family of Lola I. Murphy created this Life Tributes page to make it easy to share your memories.

Send flowers to the Murphy family.