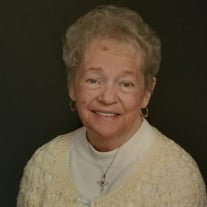 Lois Ricketts Johnson, 76, of Ocala, FL, formerly from Pennsville, NJ died peacefully on Saturday September 23, 2017. She was a breast cancer survivor and taken from us, too soon, by Alzheimer's. Lois was born on August 18, 1941 to Paul and... View Obituary & Service Information

The family of Lois Ricketts Johnson created this Life Tributes page to make it easy to share your memories.

Send flowers to the Johnson family.