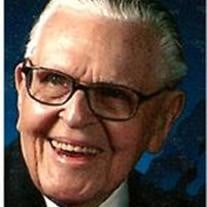 Lewis W. Wilson, age 94 of Pennsville and formerly of Carneys Point when to be with the Lord on March 2, 2008 at Christiana Hospital following a short illness. He was born on June 7, 1913 to the late John and Lilly Wilson of Penns Grove. Mr. Wilson was a member of Bethel Bible Baptist Church, Carneys Point (formerly First Baptist) where he had previously served as a deacon, rang the church bell, served as a trustee and was instrumental in moving the church’s cornerstone from the old church to the new building. He retired from DuPont – Chambers Works in 1976 following 42 years of service. He did refrigeration work on the side. Following his retirement, he enjoyed traveling the country in his motor home with his late wife Charlotte, whom he was married to for 67 years. He was a member of the Odd Fellows Lodge, the Salem County Old Boys Club and the Democrat Club. He was predeceased by his first wife, Charlotte, daughter, Darleen Doyle, grandson, Steven Doyle, sister, Elizabeth Rebman and her husband, James and his brothers, Earl Wilson and Floyd Wilson and his step son, Allen English. Mrs. Wilson is survived by his wife of 3 ½ years, Grace, daughter, Peggy Paraskewich and her husband Bill of Pennsville, step children, Ardeth Racite and her husband, Joe of Carneys Point, Shirley Innis and her husband Rod of NJ, David English of WA, sister-in-law Emily Dennis and brother-in-law and sister-in-law, Bob and Margaret Harness of CA, grandchildren, Russell and Kenny Emmons, Susan Dilks and Robin Clour, all of Pennsville, Sandra Lutes, Doreen Hancock and Michael Doyle, all of TX, 17 Great Grandchildren, four great great grandchildren, six step grandchildren and 11 step great grandchildren as well as many nieces and nephews. His smile and easy going ways will be missed by all who knew him. Although Lew was not able to ring the church bell at the beginning of the church service as he had done on most Sundays, the church bell was ringing at the time of his death, 11:00 AM Sunday morning, ushering him into the presence of his Lord. Funeral services will be held 11 AM Friday in Bethel Bible Baptist Church, 20 Elmwood Ave., Carneys Point where a viewing will be held from 10 to 11 AM. Interment will follow in Lawnside Cemetery, Pilesgrove. In lieu of flowers, memorials may be made to Bethel Bible Baptist Church, 20 Elmwood Ave., Carneys Point, NJ 08069. Arrangements are under the direction of the Ashcraft Funeral Homes, Penns Grove and Pennsville. www.ashcraftfuneralhomes.com

Lewis W. Wilson, age 94 of Pennsville and formerly of Carneys Point when to be with the Lord on March 2, 2008 at Christiana Hospital following a short illness. He was born on June 7, 1913 to the late John and Lilly Wilson of Penns Grove. Mr.... View Obituary & Service Information

The family of Lewis Wilson created this Life Tributes page to make it easy to share your memories.

Lewis W. Wilson, age 94 of Pennsville and formerly of Carneys...

Send flowers to the Wilson family.