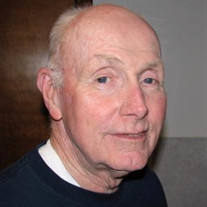 Joseph F. Sullivan, Jr., age 82, expired in his home on Friday, February 17, 2017 after enduring a long pulmonary illness. He passed peacefully into the light of Lord with his beloved wife and son at his side. Son of the late Joseph F. Sullivan, Sr. and Johanna M. Sullivan (McCarthy), Joseph was born at Underwood Memorial Hospital on October 13, 1934. Joseph was educated in the Catholic tradition by attending St. James Grammar School of Penns Grove and St. James High School in Carneys Point. Joseph was proud to serve in the Army during the Korean Conflict, and was later assigned to the 7th Army, securing Stuttgart, Germany in the years following World War II. Upon returning home, he assisted in the construction of the USS Kittyhawk in 1956, an accomplishment to which he held great pride. Joseph always had a love of the ocean, the bay, and the many container ships that traversed the shipping lanes of the Delaware River. To that end, he began his career in the DuPont Company as a Customer Service and Logistics Specialist. As his expertise and career responsibilities grew, he decided to pursue his college degree. After years of attending night school, he achieved his degree in Business Administration from Wilmington College in 1974. After his promotion to Import/Export Coordinator, he interfaced with international entities to arrange product shipments, manage costs, and deliver a standard of excellence that, coupled with his personality, made him respected throughout the industry. After twenty-seven years of dedicated service, he retired from the DuPont Company in 1992. Joseph was involved in PGCP Little League, Babe Ruth, and Big League Baseball organizations. He took tremendous joy in mentoring young children in the game of baseball - most especially his son. He served as a both a Cub Scout and Boy Scout leader, recognizing the achievement of all involved with an annual beach day and cookout at the Jersey Shore. Joseph loved the camaraderie and friendships he formed as a member of the Rainbow Mixers, one of several bowling leagues that competed each Friday at Penn Bowl in Pennsville during the 1980’s. Joseph was an avid Phillies fan that began with listening to radio broadcasts and watching an occasional game at Shibe Park with his father. He believed in Carson Wentz with the Philadelphia Eagles, enamored with his personality, reservedness, and leadership. Joseph enjoyed fishing, and routinely could be seen casting his line with evening hues behind him while seeking to catch that elusive and unsuspecting blue fish to show his son. Joseph was predeceased by his sister Jean F. Chomo and Marie A. Walsh, his mother Johannah M. Sullivan, and father Joseph F. Sullivan Sr. He is survived by his true love and wife of fifty-two years Jacqueline T. Sullivan (Heaney); his son Kevin P. Sullivan; his sister, Margaret M. Roeske; and many cousins, nieces and nephews that brought so much joy to his life. A viewing will be held from 6-8 pm, Sunday, February 26 at the Ashcraft Funeral Home, 740 South Broadway, Pennsville, NJ. The Mass of Christian Burial will be held at 11 am, Monday, February 27, at St. Gabriel the Archangel (Corpus Christi) Parish, 369 Georgetown Road, Carneys Point, NJ and followed by interment at Cathedral Cemetery in Wilmington, DE. In lieu of flowers, donations may be to St. Gabriel the Archangel Parish in Carneys Point, NJ. www.ashcraftfuneralhomes.com

Joseph F. Sullivan, Jr., age 82, expired in his home on Friday, February 17, 2017 after enduring a long pulmonary illness. He passed peacefully into the light of Lord with his beloved wife and son at his side. Son of the late Joseph F. Sullivan,... View Obituary & Service Information

The family of Joseph F. Sullivan Jr. created this Life Tributes page to make it easy to share your memories.

Send flowers to the Sullivan family.