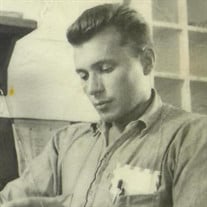 Joseph Alexander Buza Jr., 87, died of natural causes on October 1, 2017. He was born May 10, 1930 in Elizabeth, NJ. Joseph Graduated from Jefferson High School, class of 1948 with honors. Following graduation, he worked for Elizabeth Iron Works as a Structural Steel Design/Drafter until at the age of 21, then joined and served in the United States Navy during the North Korean Conflict. Joseph returned home afterwards and married his sweetheart Dolores Olivieri and enjoyed 59 years of marriage with her and had 3 children Deborah, Joseph III and Bruce. After this, Joseph began working for PSE&G as a Structural Engineer at the Salem Nuclear Plant and retired there in 1997. Joseph enjoyed fishing and boating with his 2 sons. He also enjoyed carpentry as a hobby. His biggest joy was spending time with his wife, children, grandchildren and friends. Joseph is survived by his beloved wife, Dolores Buza; his daughter Deborah Price and her husband Gary of Fanwood, NJ; his son Joseph Buza III and his wife Karen of Vineland, NJ; his grandchildren Portia Price, Alexandra Price, Ashley Green, Paige Buza, Pamala Hackett, and Corporal Joseph A. Buza IV of the United States Marine Corp. He is also preceded in death by his son Bruce R. Buza who passed away in 2000 at the age of 36. A service of remembrance will be held 12:00pm Friday October 6, 2017, at Ashcraft Funeral Home located at 740 South Broadway, Pennsville, NJ. Interment will be at Lawnside Cemetery located in Pilesgrove, NJ. www.ashcraftfuneralhomes.com

The family of Joseph A. Buza Jr. created this Life Tributes page to make it easy to share your memories.

Send flowers to the Buza family.