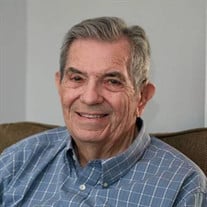 John S. Jordan, of Woodstown, formerly of Pennsville, passed away on February 26, 2016. He was 91. John was born in Carneys Point Township and raised on the family farm along with 5 siblings. He was a graduate of Penns Grove Regional High School, Class of 1943. After High School, John served in the United States Army 11th Airborne Division in the Pacific Theater as a Paratrooper. He was part of the force that occupied Japan at the conclusion of World War II. Upon the completion of his military service, John returned to Salem County to find the love of his life: Betty Jean Huber. They married in 1948 and moved to Pennsville to raise their three children. John and Betty celebrated 64 years of marriage, just prior to Betty's passing in 2012. John was a long time member of Park Bible Baptist Church, where he had served as a Deacon and Usher. John was employed by the E. I. DuPont Company for 35 years, mostly at the Carneys Point Works. He retired in 1983. John was preceded in death by his parents, John S. Jordan, Sr. and Edith (Sparks) Jordan, his wife, Betty and his brothers, Joseph, Elmer, Kenneth and Robert. He is survived by his children: John D. (Lois) Jordan of Pilesgrove; Janet J. (Judson) Lamos of Ghent, Belgium and Jeffrey C. (Susanne) Jordan of Mountlake Terrace, Washington; nine grandchildren: J. Michael (Jill) Jordan; Daniel K. (Laura) Jordan; Elizabeth K. (Aaron) Siirila; Christopher D. (Kristie) Jordan; Aldis Matthew Lamos; Erin L. (Evan) Sparks; Evan J. (Trisha) Lamos; Joshua S. Jordan and Brianna M. H. Jordan; 13 (soon to be 14) great grandchildren and his sister Elizabeth Darlington of Carneys Point. Visitation for family and friends will be held on Thursday, March 3rd at 10:00 a.m. at Ashcraft Funeral Home, 740 South Broadway, Pennsville, New Jersey, with a service to follow at 11:00 a.m. Interment will be at the First Baptist Church at Pedricktown Cemetery. In lieu of flowers, the family suggests memorial contributions to the International Women's Ministry, the ministry of John's daughter, Janet, at MTW, P.O. Box 2589, Suwanee, GA 30024-0982. Please designate for Account No. 93667. www.ashcraftfuneralhomes.com

John S. Jordan, of Woodstown, formerly of Pennsville, passed away on February 26, 2016. He was 91. John was born in Carneys Point Township and raised on the family farm along with 5 siblings. He was a graduate of Penns Grove Regional High... View Obituary & Service Information

The family of John S. Jordan created this Life Tributes page to make it easy to share your memories.

Send flowers to the Jordan family.