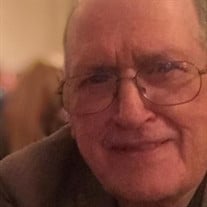 John D. Domenico, age 89, of Penns Grove, NJ, passed away on April 9, 2020 in the comfort of his home under the care of his family. John was born in 1930 to Dominic and Sarah (Fanning) Domenico. John began his employment at DuPont Chambers Works in 1950 in the Industrial Hygiene Laboratory. During his long and successful career in the lab, John was an integral part to the progress and improvement of the field. He became certified by the American Board of Industrial Hygiene as an Occupational Health and Safety Technologist and obtained certification from Rutgers University in Hospital Management. Additionally, he worked on call as a pathology assistant at Salem Memorial Hospital. John celebrated 45 years of service before retiring in 1995. He took great pride in being the longest-service employee at Chambers Works. After retirement, you could find John selling the most delicious bread and rolls at his son John’s business - Priolo’s Bakery. He enjoyed spending time at the bakery and the interaction he had with the long-standing customers of the community. He also was involved with the Washington Club and The Mother of Grace Society, in which he was past president for both. He was a member of the Knights of St. Gabriel and The Ancient Order of Hibernians. He served on the Board of Directors for the Penns Grove Housing Authority. John was an avid sports fan, and loved to tell stories of his days playing high school sports at St. James School. He played football, basketball, and baseball and went on to coach Little League teams as a fun hobby. He was a devoted Notre Dame and Philly sports fan and shared great memories of attending Notre Dame football games, World Series games, and the 1975 Flyers Stanley Cup. He was also happy to be able to see the Eagles win Super Bowl LII! John is survived by his daughter, Doreen Domenico Dixon, granddaughter, Alyssa Dixon, and son-in-law, Jackie Browne. John was predeceased by his beloved wife of 57 years, Joan (Gaudet), who he was truly devoted to until her passing ten years ago, never leaving her side. Also, he was predeceased by his son, John, daughter, Maureen, grandson, Damon, and siblings, Sadie, Rose, and Joe. John was a wonderful man of great faith who valued his family, appreciated his wife, and adored his children and two grandchildren. He was loving, caring, kind-hearted and had a great sense of humor, joking until the end. He will be missed beyond measure. Our family wishes to thank Heartland Hospice for their expertise, compassionate care and support they provided during a most difficult time. Due to the current health emergency and government constrictions, sadly, the interment will be private.

John D. Domenico, age 89, of Penns Grove, NJ, passed away on April 9, 2020 in the comfort of his home under the care of his family. John was born in 1930 to Dominic and Sarah (Fanning) Domenico. John began his employment at DuPont Chambers... View Obituary & Service Information

The family of John D. Domenico created this Life Tributes page to make it easy to share your memories.

Send flowers to the Domenico family.