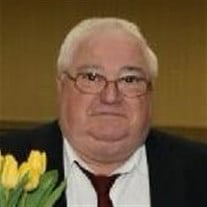 John E. Bell Jr. (Jack), age 78 years of Pennsville, NJ, died unexpectedly on June 29, 2019. He was born in Woodbury, NJ and raised in Deepwater. After graduating from Pennsville Memorial High School in 1960, he joined the U.S. Navy where he proudly served his country during the Vietnam conflict on the USS Kitty Hawk. He was honorably discharged after 4 years and continued with the Navy Reserve another 2 years. His earned awards included the Navy Good Conduct Medal, National Defense Medal, and Armed Forces Expeditionary Medal. He was also recognized for the Battle Efficiency "E" for standing number one in the Battle Efficiency during the 1962 - 1964 competitive cycle for Attack Carriers, assigned to the Naval Air Force, U.S. Pacific Fleet. He was also an active member of the Deepwater Fire Department from 1965-1973 and a DuPont retiree. He is survived by his children John E. Bell III (Stephanie) of Clarksville,TN and Jacquelyn Lombardozzi (Jude) of Norristown, PA. His sisters, Wilma "Sue" Carlson (Donald) of McHenry IL, Carol Wright, of Pennsville NJ, and Kathleen Giordano (John) of Pennsville NJ, several grandchildren and one great child. He was a loving uncle to many nieces and nephews. He was predeceased by his parents John E. Bell Sr and Regina (nee Durham). Jack was an avid camper and loved his Harley Davidson motorcycle. He loved spending most of his time at Flory's Campground in Lancaster PA where he made numerous friends over the past 40 years. Jack was often spotted at his favorite restaurants; Dienner's in Lancaster PA, Deepwater Diner, and Chobani's Restaurant in Pennsville. He enjoyed spending time with his family and friends. Services will be held July 6, 2019 at 11am at Ashcraft Funeral Home 740 S. Broadway Pennsville, NJ 08070. Family and friends can visit between 9 and 11am. Interment will immediately follow at Lawnside Cemetery Woodstown, NJ. In lieu of flowers, please consider a donation to the Salem County Veteran’s Association at 110 5th St Suite 900, Salem, NJ 08079, or the Deepwater/Pennsville Fire and Rescue. www.ashcraftfuneralhomes.com

John E. Bell Jr. (Jack), age 78 years of Pennsville, NJ, died unexpectedly on June 29, 2019. He was born in Woodbury, NJ and raised in Deepwater. After graduating from Pennsville Memorial High School in 1960, he joined the U.S. Navy where he... View Obituary & Service Information

The family of John E. Bell created this Life Tributes page to make it easy to share your memories.

Send flowers to the Bell family.