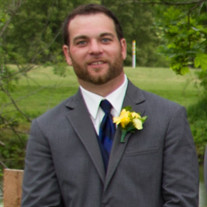 Jason Ryan Kelly, 31, formerly of Gibbstown, NJ and currently residing in Carneys Point, NJ passed away suddenly on September 12, 2014. Ryan is predeceased by his grandparents Angelina & James Clayton Kelly, Senior. He is survived by his grandmother... View Obituary & Service Information

The family of Jason Ryan Kelly created this Life Tributes page to make it easy to share your memories.

Send flowers to the Kelly family.