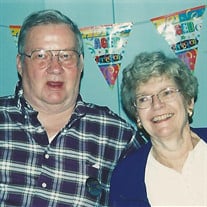 On November 1st of 1935, James Allen Patterson commenced his 79 year earthly journey. The eldest of two sons born to Davis and Elener Patterson of Carney’s Point, NJ. He grew up and was schooled in rural southern New Jersey. There he would meet and marry his lifelong soul mate, Audrey Carol Jeker of Penn's Grove, NJ. Jim served in the U.S. Navy Reserves and earned a degree in chemistry from the University of Delaware. He was employed until retirement as a chemist with E.I. DuPont de Nemours in Delaware. In their 52 years of marriage, wife Audrey bore him two sons and two daughters. After the passing of his beloved wife in 2009, Jim’s chief occupation in life was to dote on his children and grandchildren. In God’s providence, all but one, Gail, who early departed this life in 1985, were able to be by his side at his home to express their love and to bid him Godspeed on his departure to his eternal home which came at daybreak on Friday, April 24, 2015. While he will be greatly missed, his life is joyfully celebrated by his surviving three children and their children. Jim’s heritage of giving and kindness will live on in eldest son James and wife Tara of Pennsville, NJ with grandchildren Trinity, Jared, Hanna, McKayla, Caitlin, Andrew, and Joshua ; and son Chris and wife Kara of Lyndhurst, Ohio with grandchildren Clark and Juno; and youngest daughter Laura and husband John Baker of Newark, Delaware with grandsons John, Brandon and Nolan. Also commemorating Jim’s seventy nine years are his brother Davis Patterson and wife Diane and their family of Cumberland County, NJ and Florida. Additionally, aunt Jackie Data and cousins Patricia Johnson and Thomas Data, second cousins James Foreman and Fred Sparks and their respective families. Jim relished gatherings with their extended family over the decades to rejoice in our rich blessings each Thanksgiving and Christmas and to celebrate the many family milestones. Jim’s waning conscious hours were filled with the love of his devoted family and friends rejoicing in affectionate remembrances and with tearful good-byes as he peacefully departed this temporal life for his eternal one. All praise and glory to our beneficent God who so richly provided for His servant James and his loved ones throughout both good times and heartbreaking times unto the end of his assigned days on earth. Funeral services will be held at Tuesday April 28th 11am in the Ashcraft Funeral Home, 740 S. Broadway, Pennsville, where a viewing will be held from 10 to 11am. Interment will follow in Eglington Cemetery, Clarksboro, NJ. In lieu of flowers, memorials may be made to St. Jude Children’s Research Hospital, 501 St. Jude Place, Memphis, TN 38105.www.ashcraftfuneralhomes.com.

On November 1st of 1935, James Allen Patterson commenced his 79 year earthly journey. The eldest of two sons born to Davis and Elener Patterson of Carney&#8217;s Point, NJ. He grew up and was schooled in rural southern New Jersey. There he would... View Obituary & Service Information

The family of James Allen Patterson created this Life Tributes page to make it easy to share your memories.

On November 1st of 1935, James Allen Patterson commenced his...

Send flowers to the Patterson family.