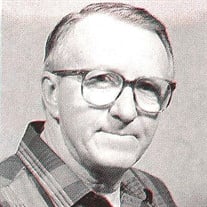 James H. Ludlam, 80 years old, passed away Monday, October 10th, 2016 at his home in Pennsville, NJ. James was born on December 18th, 1935 to John Ludlam and Emma Ludlam (nee Fisher) in his family’s home in Deepwater, NJ. As a youth, James enjoyed building things with his hands and playing with his local Deepwater friends. As a young man, he was a member of the South Millville Gunning Club and began working at DuPont Chambers Works where he retired in 1992 with 35 years of service. After retirement, James and Etta, his wife of 53 years, enjoyed many years of traveling to Lancaster and many other of their favorite destinations, including a once in a lifetime trip to Hawaii for their 40th Wedding Anniversary. James’ hobbies included model railroading, planes and spoiling the family cats. James’ life will be remembered as being that of a wonderful husband, father, grandfather, brother, son, uncle and friend to all who knew him. James is survived by his wife Etta L. Ludlam (nee McDevitt), his daughter Catherine Buckingham (nee Ludlam) and son-in-law, Jack Buckingham, his son James Ludlam and daughter-in-law, Marie Ludlam (nee Rizzo), his grandson Jack Buckingham and granddaughter Jamie Buckingham (Wray) and great-grandson Evan James. James is predeceased by his oldest son George W. Ludlam, his parents John and Emma Ludlam (nee Fisher) as well as by 2 brothers and 2 sisters; Anna Campbell (nee Ludlam), Jack Ludlam, John Ludlam and Emma Spino (nee Ludlam). A viewing will be held from 9:30 to 11:00 AM on Friday in the Ashcraft Funeral Home, 740 S. Broadway, Pennsville where funeral services will be held at 11:00 AM. Interment will follow in Eglington Cemetery. In lieu of flowers, memorials may be made to Maddy and Friends Inc., 330 Pecks Corner Rd., Salem, NJ 08079 or to Memorial Home Health and Hospice, 310 Salem-Woodstown Rd., 2nd floor, 2 East, Salem, NJ 08079.

The family of James H. Ludlam created this Life Tributes page to make it easy to share your memories.

Send flowers to the Ludlam family.