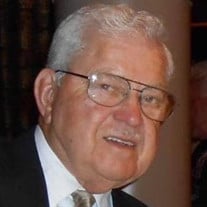 J. Stuart Belcher, a long-time resident of Pennsville, NJ, passed away peacefully at his home on April 24, 2019 -- his 89th birthday. Stu was born in Penns Grove, NJ to Stuart Sr. and Evelyn. He is survived by his loving wife of 68 years, Joan (nee Schoenfeld); sons Alan (Diana) and Steven (Patti), daughter Carol Faragher (Jim); grandsons Joey (Corin), Matt and Scott Belcher, Jimmy Faragher, and Daniel and Matthew Caraballo; beloved in-laws Karen Buncich, Bill Schoenfeld, and Carlinda Belcher; and 3 nieces and 2 nephews. He was preceded in death by his brother Richard. Stu graduated from Penns Grove high school in 1948 where he lettered 4 years in football and baseball. In his junior year, he met the love of his life, his Joanie. They married in 1951, made their home in Pennsville and were blessed with 3 children. Stu was a loving husband, father and grandfather who dedicated his life to his family. He worked 41 years at DuPont Chambers Works, served in the National Guard for 20 years reaching the rank of First Sergeant. He was a committed Public Servant of Pennsville, serving over 18 years as Township Committeeman and Mayor. Stu was a people person, he was warm and welcoming and if you were around him for five minutes you were engaged in conversation -- most likely with a drink in your hand! As their family grew, he became known as Grandpop, Pop and even The Wizard to his grandsons! Stu was an avid fisherman, crabber, clammer, gardener, golfer, and train enthusiast. He enjoyed betting on the horses, spending winters in Florida and summers boating on Rehoboth Bay. He could fix anything, saved everything, grew the best tomatoes and served the best crabs in town. Stu lived every day to the fullest, working hard for himself, his family and his community. He did what he loved to do for as long as he could. He was a wonderful role model and example of how we should all strive to live our lives. A visitation for family and friends will be held on Sunday, April 28th at Ashcraft Funeral Home, 710 S. Broadway in Pennsville from 6-8 pm. Additional visitation on Monday, April 29th at the same location from 10-11 am followed by a Celebration of Stu’s life starting at 11 am. Burial will follow at Lawnside Cemetery in Woodstown. In lieu of flowers, the family suggests memorial contributions to the Pennsville Township Historical Society, 86 Church Landing Rd, Pennsville, NJ, 08070. Stu was a founding and lifetime member. www.ashcraftfuneralhomes.com

J. Stuart Belcher, a long-time resident of Pennsville, NJ, passed away peacefully at his home on April 24, 2019 -- his 89th birthday. Stu was born in Penns Grove, NJ to Stuart Sr. and Evelyn. He is survived by his loving wife of 68 years,... View Obituary & Service Information

The family of J. Stuart Belcher created this Life Tributes page to make it easy to share your memories.

Send flowers to the Belcher family.