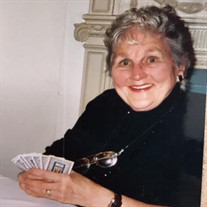 SMITH IRENE (NEE VENDIG) Age 96. Died of congestive heart failure on November 30, 2020. Daughter of Morales and Verna (nee Flenner) Vendig of Philadelphia, she graduated from Olney High School and attended the University of North Carolina at Greensboro to study art. While living in Wilmington, NC, she met Sgt. Warren M. Smith, Jr., a Penns Grove, NJ, native and they were married in 1943. The following year she gave birth to a daughter Jean and eight years later, a son Glenn. After the war, the family eventually moved to Carneys Point, NJ, which became her beloved hometown. For 65 years she was an enthusiastic supporter of all things Carneys Point/Penns Grove—the Y, the library, the Presbyterian Church, the Little League and Babe Ruth League, the high school teams on which her children played, the Flower Mart, Derby Day, the Sportsman’s Club, the Historical Society, the Cub Scouts and the holiday parades on Shell Rd. Many longtime residents remember her primarily as an enthusiastic devotee of aerobic classes for decade after decade at the Y, an activity she continued to roll up her exercise mat under her arm and walk to from her home until she was 90 and graduated to fitness classes at Merion Gardens Assisted Living. For a woman who was primarily a homemaker famous with her children’s friends for her cold juice drinks and cream puffs, she had a surprisingly broad job resume—shipyard draftswoman, hotel cashier, office manager, photographic tinter, encyclopedia saleswoman and fashion model. She volunteered at the Y to teach lingerie making, hat construction, and gift wrapping, at the Historical Society as a docent and archivist, at Salem Hospital as an aide and made posters for her husband’s monthly safety talks at DuPont. In addition she was an avid bridge player and found a creative outlet in cooking, sewing, and crafts. In later years she was known for her extensive antique toy collection that she enjoyed sharing with visitors at Christmas time. She is predeceased by her parents and her husband. She is survived by her daughter and son and his family including grandson Mattson Smith (Taylor Ivy), granddaughter Karlie Cain (Matt) and great granddaughter Kennedy. She is also survived by her sister Jean V. House of Hampton, VA, her niece Karen House, and her nephews Steven House (Cathi), Jim Smith (Anne), Bart Smith (Terry), and Neil Smith, as well as by a number of very loyal friends and neighbors from her hometown. She has chosen not to have a funeral, but donations in her memory either to the Historical Society, 48 W Main St., Penns Grove, NJ 08069 or to Life Connections of the Carolinas, a nonprofit started over twenty years ago by her son. dedicated to working with at risk youth at 420 East 15th St., Charlotte, NC 28206 or www.lifeconnections.us, would be a wonderful way to celebrate her life.

The family of Irene Smith created this Life Tributes page to make it easy to share your memories.

Send flowers to the Smith family.