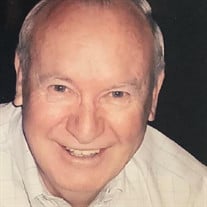 Grant L. Schermerhorn, Jr., age 85 of Pennsville, NJ passed away Monday, April 5th, 2021 surrounded by his loving family. He was born on May 16th, 1935 to Lillian M. Schermerhorn (née Rogers) and Grant L. Schermerhorn, Sr. in Conesville, NY. Raised by his grandparents, Orange Dora Schermerhorn and William Schermerhorn, he was a kind and gentle soul, as well as a hard worker. He enjoyed spending time outdoors and often reminisced about his childhood on the farm in upstate NY. He worked 32 years at DuPont’s Chambers Works in Deepwater, NJ. Grant was a long-term Red Cross volunteer into his retirement, which he also spent woodworking and worked as a bus driver. Grant married the love of his life, Nelva J. Herrman, on January 11, 1957, celebrating 63 years of marriage last year. A devoted husband, he was heavily involved in Nelva’s Sorority events. Enthusiastic travelers, they enjoyed traversing the continental US in their motorhome and visiting many islands in the Caribbean and European countries. His community involvement included many missionary trips with the Church of Nazarene-Pennsville, going as far as Alaska and Costa Rica, and was also a member of the Masonic lodge. A true family man, there was nothing he loved more than spending time with his children and grandchildren, whether seeing the world or teaching his youngest grandchild at the age of twelve to drive (a golf cart). Good humored and a troublemaker, the glimmer of mischief never left his eyes, even until the end. Grant was outgoing and a charmer, loved by all he knew, and adored by all he met. Regardless of his Alzheimer’s diagnosis trying to erase him, his humor and love of life persevered. He raised three children and looked forward to supporting his five grandchildren in their various activities and accomplishments. Visits from his five great-grandchildren never ceased to put a smile on his face, reigniting his youthful spark. The lack of his light feels unreal and will be missed during all monumental future life moments. Grant is preceded in death by his wife, Nelva Jane Schermerhorn. He is survived by his two daughters Cynthia Roeske (Alfred) and Danel Hultberg (Michael), five grandchildren Amanda Hoyt (Mike), Alfred Roeske III (Brittany), Megan Hultberg, Ryan Hultberg, and MacKenzie Hultberg, five great-grandchildren Declan Hoyt, Delaney Hoyt, Kye Roeske, Finnegan Roeske, and Atlee Roeske, and a son, Bruce Schermerhorn. The viewing will be held from 10:00-11:30 am on Saturday, April 10, 2021 at Ashcraft Funeral Home in Pennsville. The Graveside Service will be held at 12:00 pm, same day, at Lawnside Cemetery in Pilesgrove, NJ. Contributions can be made in his memory to Alzheimer’s Association https://act.alz.org/site/TR/Events/Tributes-AlzheimersChampions?pg=fund&fr_id=1060&pxfid=676082

The family of Grant L Schermerhorn created this Life Tributes page to make it easy to share your memories.

Send flowers to the Schermerhorn family.