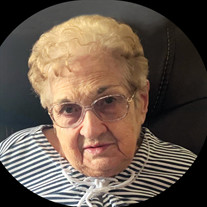 Grace Montagna Lake, age 82 of Woodstown and daughter of the late Joseph and Josephine Maconi Montagna, passed away peacefully in her sleep on Wednesday, June 15, 2022 at the home of her daughter where she has resided for the past four months. Grace was born on July 1, 1939 at the family home on East Main St in Penns Grove, NJ. She was the 5th of 6 children. She attended the Penns Grove School System and graduated from “Re-Hi”, class of 1957. She was the secretary of her class and worked on her class reunion committee. After marrying and living on East Main St. in Penns Grove for a few years, the family moved to the Valley Park area of Pennsville in 1965 where she raised her 3 children. She resided in Pennsville for 53 years before moving to Friends Village in Woodstown in 2018 because of health complications. Grace worked as a Bank Teller in the Penns Grove - Pennsville area in the early and latter parts of her life, finally retiring in 2012 at the age of 72 after about 35 total years in banking. In between banking jobs, she worked a few years in the mid 70’s at VWR Scientific in Swedesboro when it was one of the first businesses on Center Square Road. She also worked for her brother Jim at his Exxon Service Station on Trumble Ave in Penns Grove. For a few years, Grace also did engraving for the Pro Shop located in the Penn Bowl Bowling Alley when the shop was owned by her husband. She also worked the election polls in Pennsville and was secretary for Pennsville Recycling Committee for a few years in the 80’s. Grace was an active member of the Saint Ambrose Lutheran Church in Pennsville for many years. Family was the utmost important thing to her, she was extremely proud of her kids, but her grandkids and great grandkids were her biggest joy in life. She never missed the opportunity to give the little ones a card or a $2 bill. If there was ever a time that we needed a date about something that had happened in the past, “mom” almost certainly had it written down somewhere… she just had to find out where! Grace is survived by her 3 children, Jeff (Debbie) of Carneys Point, Lori Fischer (Bill) of Woodstown, Mike (Kim) Middletown, Delaware, 9 grandkids & 6 great-grandkids and several nieces and nephews. Brother Fred (Peggy) Montagna of Carmel, Indiana and Sister Rose Smith of Pennsville. She was predeceased by her parents Joseph & Josephine Montagna, brothers Joseph, James & Robert Montagna, grandson Ian Fischer and Ex husband Linwood Lake. Visitation will be held at the Ashcraft Funeral Home located at 740 South Broadway in Pennsville, NJ on Tuesday, June, 21 from 9:30am to 11am with a service at 11am. Interment will follow at Lawnside Cemetery in Woodstown, NJ.

Grace Montagna Lake, age 82 of Woodstown and daughter of the late Joseph and Josephine Maconi Montagna, passed away peacefully in her sleep on Wednesday, June 15, 2022 at the home of her daughter where she has resided for the past four months.... View Obituary & Service Information

The family of Grace Montagna Lake created this Life Tributes page to make it easy to share your memories.

Grace Montagna Lake, age 82 of Woodstown and daughter of the...