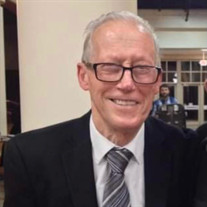 Frederick M. Renner, Jr. (80) of Landenberg, PA passed away suddenly on January 20, 2021. Born to Frederick M. Renner and Wilma E. Renner. He attended Penns Grove Schools and graduated from Penns Grove High School in 1958. He achieved the highest math grades (4 years) and highest Latin grades (2 years) in his class. He attended Rutgers University for his freshman year of college and completed the remainder of his education at Washington College in Chestertown, MD. He graduated in 1963 with a B.A. in Mathematics and a minor in Education. He achieved the highest math grades of his class for all (4) years. He briefly taught math for (3) years at West Deptford High School. During his years there he also coached football, basketball, and baseball. He then returned to Penns Grove High School to teach Math for (30) years. He coached Freshmen football (5) years, JV wrestling (4) years and Varsity wrestling (24) years, compiling a Varsity record of 241-192-4. His teams won (4) Tri-County Championships, (4) District 31 Championships and (1) South Jersey Group II Championship and (1) Edgewood Christmas Tournament Championship (36) Edgewood Christmas Tournament Individual champs, with (6) named “outstanding wrestler” (37) District 31- 1st Place wrestlers, (9) Region 8- 1st Placers, and (2) New Jersey State Champs. In 1990, he was named District 31 and Region B Coach of the Year. In 1995, he was inducted into South Jersey Wrestling Hall of Fame, in 1998 the South Jersey Coaches of Boys Sports Hall of Fame, in 2004, Penns Grove High School Sports Hall of Fame and in 2016 the Salem County Sports Hall of Fame. He finished his teaching career at Kennett High School in Kennett Square, PA where he was closer to “Ranch Renner” the residence where his nine grandchildren would spend the Summer. The Kennett Senior Class of 2008 dedicated their Yearbook to “Renner” and he then retired in 2012. His teaching career spanned 50 years. He is survived by his wife, Linda, daughter, Christine, brother, William and nine grandchildren. A visitation will be held on Wednesday, January 27, 2021 from 11:00 am – 12 noon at the Ashcraft Funeral Home in Pennsville, NJ. Burial will be private. Ashcraft Funeral Home 740 S. Broadway Pennsville, NJ 08070 www.ashcraftfuneralhomes.com In lieu of flowers, the family suggests a memorial contribution to the American Heart Association.

The family of Frederick M. Renner Jr. created this Life Tributes page to make it easy to share your memories.

Send flowers to the Renner family.