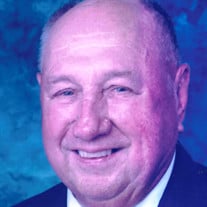 Frank A. Doughten, Jr., age 91, went home to be with the Lord on Thursday, September 13, 2018, surrounded by his loving family. He was born on April 16, 1927, to the late Frank A. and Edith (Clouser) Doughten, Sr., of Pedricktown, NJ. Frank graduated from Penns Grove High School and served in the U.S. Army from 1945-1947. He worked in operations at Dupont Chambers Works for 39 years. After his retirement in 1983, Frank, better known as Gus, spent many happy years with his wife, Miriam, entertaining family and friends in their homes in New Castle, DE, and Barefoot Bay, FL. He also loved to play golf – sometimes even six days a week. Many of his golfing exploits took him to Myrtle Beach where he frequently vacationed with family. Frank actively served in several churches during his lifetime. At the time of his death, he was a member of Crossbridge Community Church in Swedesboro, NJ. Frank will always be remembered as a loyal friend, a dedicated Christian, and a devoted family man. Frank suffered from Parkinson’s disease during the final years of his life. He was tenderly cared for by his loving daughter, Ann Doughten. Frank is survived by his beloved wife of 69 years, Miriam (Edwards) Doughten; his children Paula (Stephen) Clark, Cathy Curlett, Sarah Ann Doughten, and Harrison (Linda) Doughten; and his brother William (Doris) Doughten. Frank was affectionately known as Porky-pop by his six grandchildren—Stephen, Alyson, Christine, Faith, Cara, and David, and his ten great-grandchildren—Caleb, Rachel, Jacob, Sarah, Hannah, Griffin, Bella, Grace, William, and Samuel. In addition to his parents, Frank was preceded in death by his son-in-law, John W. Curlett. A visitation for family and friends will be held on Thursday, September 20, from 11 am – noon, at First Baptist Church, 89 W. Mill Street, Pedricktown, NJ 08067. A memorial service will begin at noon, followed by burial in the church cemetery. In lieu of flowers, donations may be made to First Baptist Church of Pedricktown at the above address or to Crossbridge Community Church, 201 Kings Highway, Woolwich Township, NJ 08085. www.ashcraftfuneralhomes.com

The family of Frank A. Doughten created this Life Tributes page to make it easy to share your memories.

Send flowers to the Doughten family.