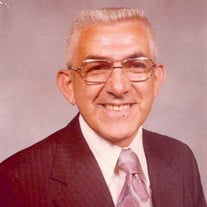 Evaggelos M. “Andy” Apostolatos, age 89 of Pennsville NJ peacefully passed away on Sunday December 14, 2014 at his home with his niece and nephew by his side. He was born on March 4, 1925 in Penns Grove, NJ to the late Mary E. (nee Sosangelis) and Mitchell E. Apostolatos. He attended Deepwater Grammar School and Penns Grove Regional High School. Andy was a lifelong member of Holy Trinity Greek Orthodox Church, Wilmington, DE. The Apostolatos family had owned and operated Seven Brothers Grocery Store in Deepwater from 1932 to 1976. Andy worked in the family business for numerous years. He served overseas for two years in the US Army (Infantry) during the Korean War and was awarded the Combat Infantry Badge, Korean Service Medal with One Bronze Star and the United Nations Service Medal. Andy is survived by his niece, Clara Drimones and his nephew, Nicholas Drimones, both of Pennsville, NJ. He was predeceased by his two sisters, Carnation Drimones in 2007 and Arkontoula M. “Goldie” Apostolatos in 2014. A viewing will be held for Andy on Thursday from 9:00 to 10:00 AM in the Ashcraft Funeral Home, 740 S. Broadway, Pennsville, NJ. Funeral Services will be held at 11:00 AM on Thursday in Holy Trinity Greek Orthodox Church, 808 N. Broom St., Wilmington, DE. Interment will follow in Lawnside Cemetery, Pilesgrove, NJ. In memory of Andy, donations may be made to Holy Trinity Greek Orthodox Church, 808 N. Broom St., Wilmington, DE 19806 or Memorial Home Health and Hospice, 390 N. Broadway, Suite #900, Pennsville, NJ 08070. www.ashcraftfuneralhomes.com

The family of Evaggelos M. "Andy" Apostolatos created this Life Tributes page to make it easy to share your memories.

Send flowers to the Apostolatos family.