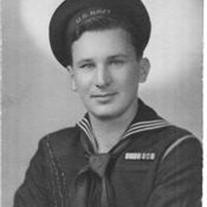 Eugene F. Vinyard, age 91 of Carneys Point passed away on Sunday November 13, 2011 at his home. He was born February 24, 1920, the son of Jesse H. and Edna Fenton Vinyard of Warwick, MD.  He went to grade school in Warwick, MD and at the age of 12 came to Carneys Point to live with his uncle, George M. Fenton.  He graduated from Penns Grove High School in 1938. He worked at DuPont – Chambers Works for 3 years then enlisted in the Navy in 1942.  A veteran of WWII, he took part in the invasions of Safi, North Africa; Gela Sicily, Salerno, Italy; St. Tropez and St. Maxine, Southern France while on the USS Lyons, APA-71. In December of 1943 he married his childhood sweetheart, Lillian Duddy.  He was then transferred to Pasgula, Mississippi to the USS Hampton, APA-115.  He left Mississippi for Newport, RI for 6 weeks of training and then on to NYC to take on supplies before going to San Francisco.  They then went to Guam, the Philippines, China and Japan before joining the Magic Carpet to bring high-point soldiers and Marines home.  They covered 70,000 miles on water in 7 months.  The last trip was to Portland, Oregon where the ship was decommissioned and then to Lido Beach, NY to be discharged before coming home.  He returned to DuPont – Chambers Works until he was laid off in 1950 and then went to DuPont – Plant 1 where he retired in 1977 with 34 years of service. He enjoyed spending summers with the family in “Grassy Sound”, North Wildwood.  He was a member of Penns Grove Masonic Lodge No. 54 for 59 years and a member of the DuPont Veterans Association. He was predeceased by his parents, his beloved wife of 60 years in 2004, Lillian (nee Duddy) Vinyard, brothers, J. Julian and William T. and grandson, Derek Brandon Vinyard. He is survived by daughter, Judith V. Epps and husband Bob of Pennsville, sons Robert E. of Florida and George F. and wife Susan (nee Lewis) of Pennsville and four grandchildren, Ryan E. (Candace) and Michael J. Vinyard of NC, Shannon (Chris) Morgan of FL and Zachary L. Vinyard and girlfriend Jennifer Hanningan of Pennsville; three great-grandchildren, Austin Ryan and Ashlyn Rae Vinyard and Abigail Grace Morgan; his brother, Arthur A. of Penns Grove and many nieces and nephews. A viewing will be held from 10 to 11 AM Thursday in the Ashcraft Funeral Home, 740 S. Broadway, Pennsville.  A funeral service will be 11 AM with Masonic services at 10:30 AM. Interment will follow in Lawnside Cemetery, Pilesgrove. In lieu of flowers memorials may be made to Compassionate Care Hospice Foundation, 11 Independence Way, Newark, DE 19713 or Union Presbyterian Church, 254 Shell Rd., Carneys Point, NJ 08069. www.ashcraftfuneralhomes.com

Eugene F. Vinyard, age 91 of Carneys Point passed away on Sunday November 13, 2011 at his home. He was born February 24, 1920, the son of Jesse H. and Edna Fenton Vinyard of Warwick, MD.  He went to grade school in Warwick, MD and at... View Obituary & Service Information

The family of Eugene Vinyard created this Life Tributes page to make it easy to share your memories.

Send flowers to the Vinyard family.