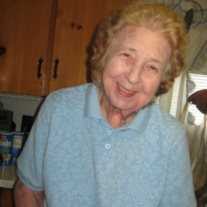 Emma Spino, also known as Auntie Em, Hotstuff or Skud, passed away at her home on Sunday February 16, 2014. Mrs. Spino had lived in Deepwater, NJ her entire life; she was the daughter of the late John and Emma R. Ludlam, also from Deepwater. She lived most of her life on the horseshoe, in the house that her husband, Albert Spino, built in 1951. Emma’s sharp wit and sense of humor were always present. When asked by family “How are you doing?” her favorite response was “Everybody I can!” Her home was neat as a pin where company was always welcomed and never an intrusion into her day. If you happened by for a spell she would have you laughing before you left because you never knew what would come out of her mouth. Earlier in her life Mrs. Spino worked at Riverview Beach Park and followed her sons in the Blue Rock Drum and Bugle Corp. Her pastimes included crocheting beautiful doilies and attending Bobbitt’s Bible Study on Tuesday nights. She was a member of Deepwater Fire Company’s Ladies Aux. along with her lifelong friend Louise Herrman. In her later years she became a one woman town watch and didn’t like her view down the street being obstructed. She wasn’t shy about asking neighbors to trim bushes or move vehicles that were blocking her view! Emma had a mind of her own and was adamant about living the rest of her life in the house that her husband, Albert, had built because she could feel his presence in “every nail and every piece of lumber”. She was very grateful to her neighbors for looking out for her. Surviving family are her loving, devoted sons Albert J. “Fotch” Spino and his fiancée Michelle of Ebony, VA and Barry “Jeff” Spino and his wife Jayne of Pennsville. Grandsons: Steven Spino and Tyler Spino. Great grandchildren: Brianna, Mykenzie, Steven and Dalton. She is also survived by her brother, James H. Ludlam and his wife Etta of Pennsville, her sweetheart and niece, Cathy Buckingham, daughter-in-law Renee Spino, former daughter-in-law Bev Spino along with several cousins, nieces, nephews and friends. In addition to her parents, Emma was predeceased by her husband Albert in 1986, son Robert “Bob” in 2012, her sister; Anna Campbell and brothers John and Charles “Jack” Ludlam and dear friend Loretta Boyce. Funeral services will be held 11 AM Saturday in the Ashcraft Funeral Home, 740 S. Broadway, Pennsville where there will be a viewing from 9:30 to 11 AM. Interment will follow in Lawnside Cemetery, Pilesgrove. The family suggests contributions to Deepwater Fire Company.

Emma Spino, also known as Auntie Em, Hotstuff or Skud, passed away at her home on Sunday February 16, 2014. Mrs. Spino had lived in Deepwater, NJ her entire life; she was the daughter of the late John and Emma R. Ludlam, also from Deepwater.... View Obituary & Service Information

The family of Emma K. Spino created this Life Tributes page to make it easy to share your memories.

Send flowers to the Spino family.