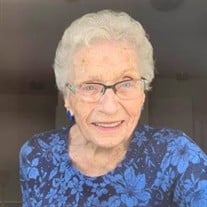 Eleanor Catherine Peak Zane died August 23, 2020 while a resident of Merion Gardens Assisted Living in Carneys Point, New Jersey. She was born July 27, 1926 and lived her entire life in the Penns Grove, Carneys Point, Deepwater and Pennsville area of Salem County. The daughter of Harry J. “Knute” Peak and Catherine M. Coyle Peak, she was one of nine children, the youngest daughter. She was predeceased by her five brothers and three sisters. As a child she loved to dance and act, a trait that remained throughout her life. She was a prolific writer of poems, many of which reflected her fond memories of her childhood at Twenty-two East Main where she and her family lived in Penns Grove. She was creative and fun! “Ellie” was mother to five daughters from her first marriage to Richard Larsson: Edna Catherine Larsson (died in infancy), Patricia Anderson (John), Ann Doran (John), Barbara Dolbow, and Eleanor “Ellie” Sweatt (David). This marriage produced eight grandchildren, fifteen great-grandchildren, and eight great-great-grandchildren. With her second husband, Bowen C. Stockdale, she had one son, William Otis Stockdale who died August 26, 2019. Ellie became grandmother to two more grandchildren. Ellie’s third husband was Levi “Zeke” Zane (died 1994) and was step-mother to his three adult children, Lee Zane, Sandra Webb (John), Kevin Zane (Della), and deceased son, William “Billy” Zane’s widow Gail Mangiocco (Dave). Although she became a step-grandmother to eleven more and seven great-grandchildren, she never considered any of them other than her own, all were loved the same. Ellie attended schools in Carneys Point and Penns Grove and was a single mom to four daughters before being a single mom was even a thing. With her second husband, Bowen Stockdale, she became a business owner and operator of their own dry-cleaning business in Pennsville. During this stage in her life, while raising her family, she served as president of the PTA at the Deepwater School, learned to drive a car in her early thirties, and taught dry cleaning in the Salem County Vo-Tech School in Salem. Single for several years after her second marriage, she traveled and worked in the office of Clemente’s Concrete in Carneys Point until retirement. In 1984, she married Zeke Zane and lived in his family home in Deepwater. They enjoyed vacations in their travel trailer to Cherrystone, Virginia and around the U.S. They enjoyed church and square dancing. Family and community were important to both and Ellie and Zeke were active in the creation of the Pennsville Historical Society and restoration of the “Churchtown Farm Museum” before Zeke’s death in 1994. Ellie continued her love for this organization until her nineties, spending many Wednesdays with her friends cataloging, writing books, and creating videos about Pennsville’s historic Riverview Park. In 2013, she was named Grand Marshall of the Septemberfest celebration held annually in the Park. In her seventies, Ellie moved from the home she and Zeke enjoyed in Deepwater and lived for many years in the Village Arms Senior Apartments in Carneys Point. While she continued to be active in the Pennsville Historical Society, Ellie was instrumental in the creation of the Penns Grove, Carneys Point, and Oldmans Township Historical Society where she loved working as curator, conducting oral histories, and creating exhibits. She also got to put on lovely costumed teas with her many friends to raise money for the Society. Always active, Ellie traveled with her children and their families, celebrated holidays, and life in general. She was loveable and likeable, a friend to a great many people. She made an indelible mark on our hearts that will forever be with us. We will miss our Mother, Mom, MomMom, Grandmom, “Two Nana,” and friend, Ellie. The Ashcraft Funeral Home, Penns Grove, NJ will conduct graveside services at 10:30, Saturday, August 29, 2020, at the Lawnside Cemetery, 1017 Route 40, Pilesgrove/Woodstown, NJ. In lieu of flowers, donations may be made to the Pennsville Historical Society & Museum, 88 Church Landing Road, Pennsville, NJ 08070 or the Historical Society of Penns Grove, Carneys Point & Oldmans, 48 W. Main Street, Penns Grove, NJ 08069. www.ashcraftfuneralhomes.com

The family of Eleanor Catherine Peak Zane created this Life Tributes page to make it easy to share your memories.

Send flowers to the Zane family.