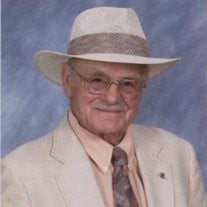 Edwin (EZ) Zielsdorf, 91, of Elmer, NJ, departed this world for Heaven when he died suddenly at his home on Saturday. He was born to the late Wilkhelm and Catharine Zielsdorf on April 3, 1922 in Harvey, North Dakota. Ed served in both the Canadian (1941-42) and United States (1943-45) Navies during World War II. He received the Presidential Unit Citation, the Asiatic Pacific Ribbon with two stars, The Philippine Campaign Medal, Americas Campaign Medal, and World War II Victory Medal before his discharge from the US Navy in 1945. Shortly after his separation from the Navy, Ed joined the Bricklayers and Allied Craftsmen Local 5 in Bordentown, NJ, where he worked in the masonry trade for many years. He was a 1990 graduate of the Liberty Home Bible Institute, receiving a certificate in Biblical Studies. He also served as a missionary with New Tribes Missions in Florida during the 1990’s. Ed was always active, working at his home, helping others with masonry projects and riding his beloved horses while in his 80’s. Ed loved the Lord with all his heart and was a long time member of Hardingville Bible Church. He is predeceased by his brothers EauCaire, Julius and Calvin Zielsdorf, his sisters Lorrine Shapansky and Elsene Zielsdorf and his first wife Edith Zielsdorf. He is survived by his wife of 17 years Mary Jane nee Rivell (Racite) Zielsdorf, his sons Edwin (Barbara), Ronald (Judy), and Donald (Carol) Zielsdorf, his daughter Joan Graeber (Alex), his stepchildren Mary Racite, Joseph F. Racite (Ardith), Patricia Livesay (David), Deborah Curtis (Dale), Susan Racite, Alfio Racite (Lisa), and Lori Bruce (Dave), 28 grandchildren/step grandchildren, 29 great/step great grandchildren and 2 step great great grandchildren. He is also survived by a brother Odell Zielsdorf (Margaret), sisters Lillian Zielsdorf, and Esther Stewart. Services will be held on Thursday, May 23rd at Hardingville Bible Church, 284 Whig Lane, Monroeville, NJ. The viewing will be from 9:30 -11:00 A.M., immediately followed by a service. The grave side will be at Woodbury Memorial Cemetery, on Kings Highway & Jessup Rd. (551), West Deptford, NJ. In lieu of flowers donations can be made to either: Hardingville Bible Church Mission Fund, 284 Whig Lane, Monroeville, NJ 08343 or Tri-State Bible Camp, 2 River Rd., Montague, NJ 07827

Edwin (EZ) Zielsdorf, 91, of Elmer, NJ, departed this world for Heaven when he died suddenly at his home on Saturday. He was born to the late Wilkhelm and Catharine Zielsdorf on April 3, 1922 in Harvey, North Dakota. Ed served in both the... View Obituary & Service Information

The family of Edwin (EZ) Zielsdorf created this Life Tributes page to make it easy to share your memories.

Send flowers to the Zielsdorf family.