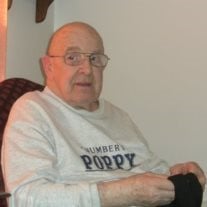 Edward J. Brancard, Jr., (affectionately known as Ed or Poppy), 82, of Penns Grove, New Jersey, earned his angel wings on January 1, 2014 at home surrounded by his loving family. Born on July 1, 1931 in Yonkers, New York, Ed was the son of the late Edward J., Sr. and Mary Brancard. Ed was a Navy Veteran of the Korean War and after returning home married the love of his life, Doris. He was employed by E.I. DuPont Co., Wilmington, Delaware, retiring in 1985. After retiring, Ed spent all of his time with his precious wife and family. Ed was an avid hometown sports fan always cheering for his Yankees and Giants. Although he suffered many health obstacles, Ed always had a joke, laugh and smile for everyone. He was well loved by all and found great joy in making others happy. He will be most remembered for his dedication to his family and faith as he was a devoted and loving husband, father and grandfather. Ed was a lifetime member of St. Gabriel the Archangel (formerly St. James) Roman Catholic Church and belonged to numerous organizations within the church during his lifetime. He was also a member of the Penns Grove VFW and a Past Commander. Ed is survived by his beloved wife of 58 years Doris E. (nee Kute), his son, Edward J. Brancard, III (Joanne) and children, Troy and Karyn; daughter, Patricia (Patti) Willis (Bill) and daughter, Brittany Chafin (Kevin); daughter, Sharon Whittick (Bob) and daughter, Jillian; daughter, Carol Giordano (Jim) and children Michael Willis (Dana), Alysia Trunkwalter (Ben) and Jaclynn. He is also survived by his great-grandchildren, Brynlee, Delayni, Sophia, Ava, Colt and Dallas; brothers, Donald E. Brancard of Florida and Raymond Brancard of Connecticut and numerous nieces and nephews. In addition to his parents, he was predeceased by his baby daughter, Karen Brancard and sister, Edna Pallo. Family and friends will be received at a viewing on Monday, January 6, 2014 from 9:30 to 11:00 AM at St. Gabriel the Archangel Parish -Corpus Christi Roman Catholic Church, 369 Georgetown Road, Carneys Point, New Jersey. A mass of Christian Burial will follow in the church. Interment will be at the Salem County Veterans Cemetery, Woodstown, New Jersey. In lieu of flowers, the family requests donations in his memory may be made to Penns Grove Ambulance Squad, P.O. Box 254, Penns Grove, New Jersey 08069. www.ashcraftfuneralhomes.com

The family of Edward J. Brancard Jr. created this Life Tributes page to make it easy to share your memories.

Send flowers to the Brancard family.