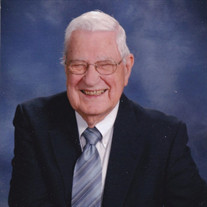 Rev. Earl Douglas Strickland January 30, 1928 – January 28, 2016 AGE: 87 Reverend Earl Douglas Strickland passed away in New Orleans, LA on January 28, 2016 after a brief illness. Born in Humboldt, TN, Doug was a World War II veteran who believed that “Once a Marine, Always a Marine”. During the 1960s, he was instrumental in developing the Lay Witness Mission program through the Board of Evangelism of the United Methodist Church. This experience led him to join the staff of the Haddonfield United Methodist Church in 1973 and, later, to become an ordained minister. He was also a respected real estate broker for Fox and Lazo Realtors for many years. As a Methodist minister, he devotedly served churches in Pemberton, NJ, Malaga, NJ, Pedricktown, NJ and Penns Grove, NJ. At the time of his death, Doug was a resident of Hutto, TX. where he was a Retired Minister in Residence at the First United Methodist Church of Round Rock, TX. Doug was predeceased by his beloved wife of 65 years, June Jones Strickland and his brother Neil Franklin Strickland. He is survived by his three loving children, Janice Mohrfeld (Richard) of Pilesgrove, NJ, Alan Strickland (Patricia) of Georgetown, TX and Holly Kirk of New Orleans, LA. He is also survived by 6 grandchildren, Kate Mohrfeld, Christopher Mohrfeld, Michelle Strickland, Samantha Kirk, Sean Strickland and Shannon Kirk as well as a brother, David Strickland (Anita) and sister, Sharon Strickland of Louisville, KY. A memorial service for Rev. Strickland will be held on Saturday, March 19, 2016 at 10:00 AM at the Haddonfield United Methodist Church, 29 Warwick Road, Haddonfield, NJ 08033. In lieu of flowers, the family requests contributions in his memory to the American Heart Association or the charity of your choice. Burial will be private.

The family of Rev. E. Douglas Strickland created this Life Tributes page to make it easy to share your memories.

Send flowers to the Strickland family.