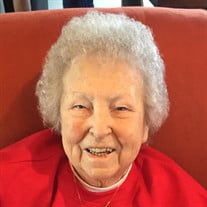 Doris E. Brancard, 87, of Carneys Point, New Jersey, earned her angel wings on October 4, 2018 surrounded by her loving family. Born on October 19, 1930 in Salem, New Jersey, Doris was the daughter of the late Donald and Florence Kute. She was a homemaker and worked part-time for the Army & Air Force Exchange (DOD) in Pedricktown, New Jersey. Doris will be most remembered as an extraordinary wife, mother, mommom, and mommommom, who found joy in making her family happy. One of her greatest pleasures was the yearly trips to the shore with the entire family. Doris was an avid Phillies Fan and always believed in the team. She had an immeasurable dedication to her family and faith. Doris was a lifetime member of St. Gabriel the Archangel (formerly St. James) Roman Catholic Church and belonged to numerous organizations within the church during her lifetime including being a Eucharistic Minister. She had a special devotion to the Sacred Heart and Blessed Mother. Doris was predeceased by the love of her life to whom she was married for 58 years, Edward J. Brancard, Jr. She is survived by her daughter, Patricia (Patti) Willis (Bill) and daughter, Brittany Chafin (Kevin); her daughter Sharon Whittick (Bob) and daughter, Jillian; son, Edward J. Brancard, lll (Joanne) and children, Troy and Karyn; daughter, Carol Giordano (Jim) and children Michael Willis (Dana), Alysia Trunkwalter (Ben) and Jaclynn Willis. She is also survived by her great-grandchildren, Brynlee, Brienna, Colt, Dallas, Delayni, Sophia, Ava, Gemma, and Jayce; sister, Betty Myers, and numerous nieces and nephews. In addition to her parents, she was predeceased by her baby daughter, Karen Brancard and brothers, Donald N. Kute, Jr. and Everett Kute. Family and friends will be received at a viewing on Tuesday, October 9, 2018 from 9:30 to 11:00 AM at St. Gabriel the Archangel Roman Catholic Church, 369 Georgetown Road, Carneys Point, New Jersey. A mass of Christian Burial will follow in the church at 11am. Interment will be at the Salem County Veterans Cemetery, Woodstown, New Jersey. In lieu of ﬂowers, the family requests donations in her memory may be made to Meals on Wheels, 90 Market Street, Salem, New Jersey 08079. www.ashcraftfuneralhomes.com

Doris E. Brancard, 87, of Carneys Point, New Jersey, earned her angel wings on October 4, 2018 surrounded by her loving family. Born on October 19, 1930 in Salem, New Jersey, Doris was the daughter of the late Donald and Florence Kute. She was... View Obituary & Service Information

The family of Doris E. Brancard created this Life Tributes page to make it easy to share your memories.

Send flowers to the Brancard family.