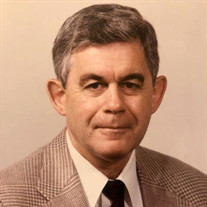 David L. Haines, 89, of Wilmington, DE, passed away after a brief illness on February 3, 2022. He was the middle son of George Irving and Grace Haines. Born on October 13, 1932, he lived most of his life in Carneys Point, NJ. David spent 4 years proudly serving in the United States Navy where he did several Mediterranean cruises and a world tour aboard the USS Saipan CVL48 during the Korean War. He worked in flight deck operations on the catapult crew wearing a bright yellow sweatshirt for visibility. Ever one to be safe, and always the patriot, he continued to wear the same color sweatshirt almost daily until his last days. After serving, he returned home and enjoyed a long career as an electrical draftsman at DuPont Chambers Works. There he met his wife Emily of 65 years. They settled down on B Steet in The Village to raise their family. A long-time member of Union Presbyterian Church, David served as a Deacon, taught Sunday School, and spent many years taking care of the church property including grass cutting, shoveling snow, or painting, having his young son Dave work along with him, teaching him the value of hard work and giving back to the community. In his younger days, David enjoyed hunting with his dog Mike; as well as surf and sea fishing and even dipped a rod at Layton’s Lake. He was predeceased by infant son Aaron, both parents, and brothers G. Irving and Charles. David leaves behind wife Emily, 2 children, David (Jean) and Kathleen Price (Robert), 3 grandchildren, David, Ali and Rachel and 2 great grandchildren, Zachary and Angela. In lieu of flowers, remember David by contributing to St. Jude’s Hospital for Children. Then enjoy your favorite ice cream with a cookie and sing “Zippity Doo Dah” at the top of your lungs. Burial will be private.

David L. Haines, 89, of Wilmington, DE, passed away after a brief illness on February 3, 2022. He was the middle son of George Irving and Grace Haines. Born on October 13, 1932, he lived most of his life in Carneys Point, NJ. David spent... View Obituary & Service Information

The family of David L. Haines created this Life Tributes page to make it easy to share your memories.

Send flowers to the Haines family.