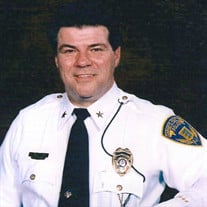 After a valiant battle with cancer, Cosmo Mangiocco, passed away peacefully at home with his family by his side on November 2, 2020 at the age of 77. Most people lovingly called him Cos. Cos was born, raised and remained a citizen of Salem County his whole life. He attended St. James High School where he graduated in 1961. Thereafter, he served in the United States Air Force. He was first employed as a police officer in the borough of Penns Grove, until he transferred to Carneys Point Police Department. Cos served the Carneys Point Department for 37 years, the last 9 years of his career he served as Chief until he retired in 2006. Cos was very proud of serving as Police Officer and a Chief. He was proud of the men and women who served beside him. Cos was a pillar in the community he was involved with many different organizations and community programs. Cos was a member of the Salem Co. Firearms Instructors, the NJ Traffic Assoc,Narcotic Enforcement Officers Assoc, Former President & Treasurer of the Carney's Point Police Officers Assoc., and a Former President of the Salem Co. Chief's of Police Assoc..Cos was also a member of the Servicemen's Memorial Home, Sakima Country Club, the Salem County Fraternal Order of Police Old Oak Lodge #6, and Former Board of Director at HealthCare Commons and Sakima Country Club. Cos has also donated his time and knowledge to many youth organizations throughout the years. Cos was involved and coached PG-CP-PD Little League , Babe Ruth, and Twins Football for over 16 years. Cos was also responsible for organizing the Penns Grove -Carneys Point Police Softball League and was the commissioner for 12 years. Cos's laugh was thunderous and infectious. He could light up a room with his larger than life smile. He loved golfing with his friends at the Sakima and playing darts.He enjoyed cooking, especially holiday dinners-his seafood lasagna was a family favorite. You would never find a crease in Cos's clothes- he ironed everything. Cos wore dress clothes and shoes from the time he rolled out of bed, until the time he rolled back into bed. He was a creature of habit: up at the same time, shower, clothes , cologne, coffee, paper and crossword puzzles. And don't even think about walking in his house without saying hi, bye or giving a hug-but then again why would you. Cos is predeceased by his parents Cosmo and Alpha (Spencer) Mangiocco. He is survived by his brother David (Gail) Mangiocco; Wife: Celeste (Sayers) Mangiocco; Daughter: Kimberly (Gene) Lapp, Grandchild:Erika (Kyle) Bickhart; Grandson: Joseph, Justin Son: Cosmo Mangiocco III, Grandchildren Ashlyn, Cossie ; Son: Hobie (Victoria) Medford ; Grandchildren: Hobie,Harper, McKenna Son: Jack Medford and (Kellie Danks); Grandchild: Gianna; Son: Thomas (Lisa) Medford; Grandchildren: John, Chris, Taylor, Kayden, Cannon, Liam and Piper. Raised niece and nephew Walter R. Sayers III and Jamee C. Sayers among many other nieces, nephews and family members who admired and adored him. He was so many things to so many people a father, a father figure, a husband, a mentor, a friend, a confidant, a companion, a coach, admired and much more, but most important he was so loved. A walk through visitation will be held at Ashcraft Funeral Home, 740 S. Broadway, Pennsville, NJ 08070 on Thursday November 5th from 6pm -9pm. Given the current pandemic, social distancing and mask policies will be followed. A graveside service will be held on Friday November 6th at 11am at Eglington Cemetery 320 Kings Hwy, Clarksboro, NJ 08020. Those wishing to participate in the funeral procession can meet at the Ashcraft Funeral Home in Pennsville by 10:30am and remain outside in their cars till the procession begins. In lieu of flowers, the family has selected charities that we currently donate to: His son Hobie is currently a part of the Gallant Heart Charity, Cos was very proud. Gallant Heart wounded veteran & active service member charity and can donate at gallantheartnj.org or Gallant Heart 11 Two Penny Run West Pilesgrove, NJ 08098 or Saint Judes Hospital for Children. www.ashcraftfuneralhomes.com

After a valiant battle with cancer, Cosmo Mangiocco, passed away peacefully at home with his family by his side on November 2, 2020 at the age of 77. Most people lovingly called him Cos. Cos was born, raised and remained a citizen of Salem... View Obituary & Service Information

The family of Cosmo Mangiocco created this Life Tributes page to make it easy to share your memories.

After a valiant battle with cancer, Cosmo Mangiocco, passed away...

Send flowers to the Mangiocco family.