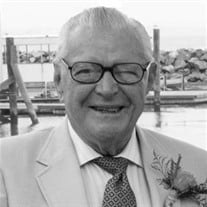 Chester W Spicer, age 94, a long time resident of Carneys Point and more recently of Woodstown, died Friday evening, January 5, 2018 at Friends Village at Woodstown. He was born in 1923 to the late Alice (Troupe) Spicer and Chester D Spicer. Mr. Spicer graduated from Penns Grove High School and served in the U.S. Navy for 3 ½ years in the south Pacific during World War II. After his service, he worked for the DuPont Company for 40 years. Following his retirement from DuPont, he worked part-time for 12 years for Salem Community College. He volunteered with numerous organizations, including the Boy Scouts of America (which awarded him its highest adult honor, the Silver Beaver Award), the YMCA of Salem County, the March of Dimes and the Salem County Mental Health Board. He also volunteered for 16 years with Meals on Wheels, and drove cancer patients to their appointments for many years. He was a life-long member of the Church of Our Merciful Saviour in Penns Grove. Mr. Spicer was predeceased by his wife of 60 years, the former Florence Armstrong. He is survived by his sister Esther Myers (Richard) of Pennsville, his daughter Paula Nivens (Ronnie) of Rock Hill, SC, his son Chester “Chip” Spicer (Judy) of Columbus, OH; five grandchildren, Andrew Norris, Ryan Norris, Scott Spicer, Lisa Murray and Cara Orfield, and nine—soon to be ten-- great grandchildren. His uncommon generosity towards family, friends, and community, and his enthusiasm for life, will continue to strengthen those who knew him. Family and friends are invited to attend a visitation at 10:30 am, followed by a memorial service to honor and celebrate his life at 11:00 am on Saturday, January 13 at the Ashcraft Funeral Home, 740 South Broadway, Pennsville. There will be no viewing. Interment will be at the Salem County Veteran’s Cemetery, 719 NJ-45, Pilesgrove, following the service. In lieu of flowers, contributions in Mr. Spicer’s memory may be made to the Memorial Fund of the Church of Our Merciful Saviour, PO Box 72, Penns Grove, NJ 08069; the American Cancer Society, https://www.cancer.org/involved/donate/memorial-giving.html; or Friends Village of Woodstown, One Friends Drive, Woodstown, NJ 08098. www.ashcraftfuneralhomes.com

The family of Chester W. Spicer created this Life Tributes page to make it easy to share your memories.

Send flowers to the Spicer family.