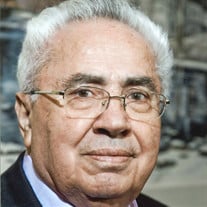 Antonios Kotanidis, his family’s patriarch, passed away peacefully in his home in Pennsville, NJ on Sunday, December 30, 2018. Lovingly known as “Papou” by friends and family, Tony was a devoted husband, loving father, doting grandfather and great-grandfather, loyal family member, and generous friend. He immigrated to the United States in 1970 looking to start a new life in a new country, and in the process established a legacy on two continents. In 1974, he co-founded Pat’s Pizzeria with his brother-in-law, Joe, and his nephew, John, which now spans four states. While Tony embraced his new home and country, he never forgot his roots in Koromilia, Greece. Tony visited his homeland as frequently as possible and it didn’t take much to make him happy. He enjoyed spending time with friends and family, playing cards and backgammon, and drinking Greek coffee. Tony was an avid golfer and travel enthusiast; he once made a hole-in-one at a local country club and often shared stories of his travels. Tony’s joie de vivre was contagious and never failed to infect those around him. He is survived by his wife Roula; his 3 daughters Jenny (Ilias) Stamatiadis, Alexia (Theo) Roustopoulos, and Maria (Kleo) Pechlivanidis; his sister, Irini; 8 grandchildren; 4 great-grandchildren; and countless nieces, nephews, and relatives. A gathering will be held at the Ashcraft Funeral Home in Pennsville, NJ on Thursday from 7 to 9pm. A funeral service will follow on Friday at noon at Holy Trinity Greek Orthodox Church located at 808 N. Broom St. Wilmington, DE 19806. Interment will follow at Silverbrook Cemetery in Wilmington, DE. www.ashcraftfuneralhomes.com

The family of Antonios Kotanidis created this Life Tributes page to make it easy to share your memories.

Send flowers to the Kotanidis family.